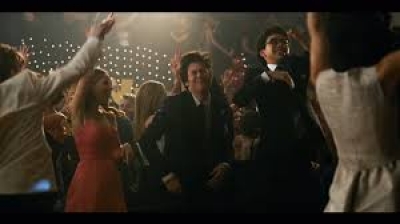 You can pick your house but you can’t pick your neighbors. Thankfully for a young Quentin (Josiah Cerio) this new neighbor can be the love of his life, Margo (Hannah Alligood). They became the best of friends, biking, hiking, exploring, and finding a dead man, yes that’s right a dead man. Not a big part of the film by no means but at least an interesting afterthought. This story seems to have many of those along the journey of Q and M. Quentin, the serious driven one determined to become a doctor and Margo, the mysterious one just out for attention while trying to find herself.

Years later, Q (Nat Wolff) and M (Cara Delevingne) drifted apart while attending Jefferson Park High School in Orlando, Florida. Q has his best friends Radar (Justice Smith) a smart student as well set to attend school in Boston currently dating Angela (Jaz Sinclair) and Ben (Austin Abrams) known in school as the red pee boy who has a crush on Lacey (Halston Sage) she happens to be best friends with Margo. Or at least Margo was friends with Lacey at one time that is until Margo decided to take revenge on a group of her so called friends for not telling her that her boyfriend Jase (Griffin Freeman) small penis, was cheating on Margo with her other friend Becca (Caitlin Carver) the home wrecker. So one night M asks Q to help her with the revenge on her friends and out of love he agrees. Oh love is blind sometimes isn’t it? A locked steering wheel, naked photos, saran wrap, petroleum jelly and Nair, the deed is done and soon thereafter so is M as she disappears from her home town.

Moving forward Q is on a journey to find M after he searches for clues left behind hopefully pointing him towards her whereabouts. Would you travel 1200 miles to search for the love of your life? Well Q does and happens to take a few friends. A long journey and a cow later Q finds his answers but they may or may not have been what he was looking for all along in a paper town with a population of one. Sometimes people disappear to find themselves, to learn who they truly are and sometimes what they find is a paper girl in a paper town. Different people have their first times and others may have their last times but either way it’s important to admit your wrongs, believe in miracles and always take notice before it’s too late and never consider rumors to be truth. Everyone has a story to tell!

I absolutely enjoyed this film that is directed and written well but at times it seems to lack substance. It reminded me of films from the 80’s at times but lacked a bit of character development for some of the co-stars. I mean you have the nerds versus the jocks in the whole high school scene even though they don’t throw it in your face they make it evident. Yet there are a few subtle surprises here and there. The search for Margo gets a bit strange given the circumstances and the outcome but overall it’s still intriguing. I especially enjoyed the fact they mentioned the city I grew up in, Scranton, during the car journey from Orlando to New York. The film has its fun and its life’s lessons to learn yet overall thanks to a good score this film has its moments.

I liked Wolff, a bit nerdy but loveable. Delevingne performs well but for some reason I was not as invested in her, maybe her “Cindy Brady” lisp had something to do with it which kind of came in and out! Abrams was the most exciting character and Smith was kind of just there. Sage was like something out of the 80’s for sure with Sinclair, Freeman, Carver, RJ Shearer who played Chuck and Meg Crosbie who played Ruthie, Margo’s little sister, all being great side-lines yet under-used to this story line. Overall I liked the film but felt it missed some possible great moments in time. Written with 2 paws out of 4 by Jon Patch.

More in this category: « Ant-Man Pixels »
back to top