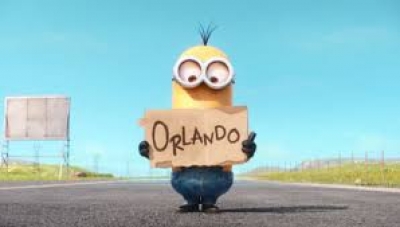 The Minions (voice of Pierre Coffin) life story is told with the help of a Narrator (voice of Geoffrey Rush) explaining how they start from a single celled organism in the sea evolving to life on earth. They search for a master to serve and seek out the ferocious T-Rex which did not quite work out thanks to a sudden fall. The Stone Age came and the Minions found a leader in the not so intelligent cave man that loses a battle with a bear based on choice of weapon. Ancient Egypt no luck! The Dark ages were too bright for a celebration and as for Napoleon too short but explosive. No leaders and on the run the Minions end up in a frozen cave somewhere in Antarctica. This cave becomes their home that is until depression sets in since they cannot find a leader let alone an evil one.

Kevin comes up with a plan and decides to tell the rest of the Minions. He chooses two other Minions, Stuart and Bob, to go on a journey and find an evil villain to serve. Their first step outside the cave Kevin is filled with pride, Bob with fear and as for Stuart he’s just hungry but he did save himself a banana at least for a second. They travel the world and end up on a small Minion made boat in the sea and when almost ready to give up they end up in New York City in the year 1968. Lots of adventures, sightseeing, attractions and banana’s they search for a villain. They find the whereabouts of one and she is at Villain Con in Orlando, Florida. Hitchhiking their way there the three Minions get picked up by the Nelson family, Walter (voice of Michael Keaton), Madge (voice of Allison Janney) and their three evil children. The ride is long with a few stops along the way but they eventually make it to Orlando.

After meeting Scarlett Overkill (voice of Sandra Bullock) they win her over and become her henchmen in England where they meet her inventor husband Herb (voice of Jon Hamm). Scarlett has a plan and it is to fulfill her childhood dream and take over the crown of England and with the Minions help she tries to achieve it. The rest of the Minions are on their way after fleeing from their cave after a slight accident with some abdominal snowmen. They travel across the world eventually ending up in Britain. King Bob was in control for some time until Scarlett came back into the scene and life for the Minions soon went from good to bad but back to good for the most part. Yet in the end Sir Kevin thanks to the Queen (voice of Jennifer Saunders) has found a potential new boss for his Minions, a bit young but still very evil and his name is Gru (voice of Steve Carell).

Almost everything about this film is spectacular, the animation, the music, the direction for the most part and the writing as well for the most part. It will surely entertain the family since it leans more towards family than single adults. Either way you look at it the film is for the kids with some adult humor mixed in. I liked the predicaments the Minions got in but felt they were too rushed and I would have enjoyed a bit more character development. Yet overall I entered into this screening a bit tired, with high expectations but for some reason maybe the ones I mentioned I did not think the film was as funny as the “Despicable Me” films. I think the Minions are great co-stars rather than stars themselves. Most of the time the potential was there but many times I thought there was a lot of foreplay but no climax if you know what I mean! Don’t get me wrong it is a cute, funny film but just not as top banana as I hoped. The actors did great jobs with all their voices giving top honors to Bullock and Janney and of course Rush for his narration work but albeit said and done it’s a fun film for the family but just not as well produced as I would have hoped for since they the Minions are truly adorable. Written and overall enjoyed with 3 paws out of 4 by Jon Patch.

More in this category: « Amy Self/Less »
back to top

We have 647 guests and no members online