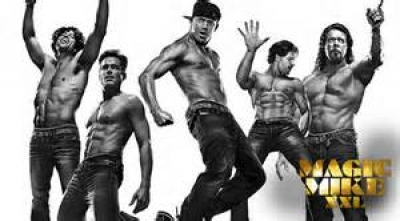 So I’m walking into the theater tonight to review this film, in line I see my friend Jesse from South Carolina with his girlfriend, so I invite them to join me in the critics seats. Not long after Rossi who works with the film company comes up to say hello does Jesse become shirtless standing up in his Magic Mike hat in front of a theater of hundreds. Let’s just say he blew the roof off the place. Yes, he is a male entertainer, for those of you less educated on the term; he’s a stripper who performs in Ybor City, Tampa, Florida. Ironically, the same part of town where the star of this film Channing Tatum once danced. So now on with the review.

Mike Lane (Channing Tatum) now single, living in Tampa, runs his own business and has been out of entertainment for three years. He receives a call from his old team that Dallas has passed on so he meets up with them at some cheap hotel. What he finds is rather than death a big pool party and all his old buddies, Big Dick Richie (Joe Manganiello), Tarzan (Kevin Nash), Tobias (Gabriel Iglesias), Ken (Matt Bomer), Tito (Adam Rodriguez) among many others. Much to my surprise my friend Zack was at this same party and I did not even know he was in the film as an extra. Yes, he’s a male entertainer as well.

The guys entice Mike to join the gang for the last final hooray so they pile into the Fro Yo Body food truck and hit the road on an adventure to Myrtle Beach to attend and perform at the stripper convention. Several stops along the way we get to experience the guys playing with Molly, we see a Mini Mart cashier (Lindsey Moser) smile and not just because of Cheetos and water, participate with mad Mary’s at a gay bar in Jacksonville, Mike makes a new friend Zoe (Amber Heard), they all meet Nancy Davidson (Andie MacDowell) and her lady friends and eventually the guys bond once again like true brothers, Honestly there was a little too much bonding and not enough music and dance in my opinion although the women kept screaming. I think the director missed the mark on this one by not projecting more skin and less dialogue. This film is not Citizen Kane it’s a stripper movie!

I will admit the stop at Rome’s (Jada Pinkett Smith) house was a bit on the wild side and we get to see quite a bit of Augustus (Michael Strahan) the other half to Kelly Ripa on the morning show Kelly and Michael. Yes he is quite the big boy in many ways ladies. It’s not until White Chocolate, Mike, dances for Rome in front of many Queens does he win her over for some help while they’re on the road. It’s fourth of July weekend and the guys meet up with Paris (Elizabeth banks), love her, who thanks to Rome allows the guys now including dancer/choreographer Malik (Stephen ‘Twitch’ Boss), you know him from “So You Think You Can Dance” to dance at the convention. Hundreds of screams later this was their last dance.

I enjoyed the film but I thought the first one was so much better, younger, and more innocent in terms of originality. This sequel seemed to be too much dialogue which gets a bit tiresome and not enough music and dance. The writing is well done for the most part but the story just seems a bit too choppy at times yet again most people are there for skin of which we don’t see as much as I thought we would. The guys are definitely older but they still move pretty well and of course also look quite well too. The score is well done which could lead to a decent soundtrack and some of the moves are fresh and new, dance moves that is.

Tatum still looks great and has some incredible moves although not always smooth. Big Dick is looking fine on and off the floor, Tarzan a bit on the too old for a stripper side, Tobias is full of humor when he is on the screen, probably needed a bit more of him, Ken is honest with great vocals, Tito being more like a support than one of the leads, yet overall it is a good cast from leads to supports to extras. I just think the director and the writers lost their focus a bit and tried too hard to make this film a drama more than a music and comedy. Overall I enjoy this film, maybe not as much as the women in the theater but I thought the director and writer could have made it more entertaining and less documentary so for that reason alone I give it 2 paws out of 4 by Jon Patch.

More in this category: « Terminator Genisys Amy »
back to top