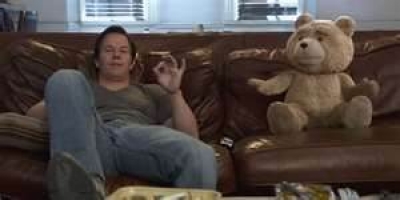 The bells are ringing, the guests are seated and it’s a beautiful wedding day for Ted (voice of Seth MacFarlane) and his beautiful bride Tami-Lynn (Jessica Barth). After their words in several different ways are pronounced “I do” Sam Jones (Sam Jones), Flash, declares them husband and wife, so to speak. The reception is full of well-wishers, friends and family, a gorgeous cake and a huge production number to follow.

One year later, things at the Ted house are not so warm and fuzzy rather a bit cold and angry and their marriage is a bit on the rocks. Ted seeks advice from his best friend Johnny (Mark Wahlberg) but he himself is in a deep depression after wasting six years of his life with the wrong woman. Drugs, alcohol and porn with a few cameos by celebrities eventually lead Ted to the realization of how to save their marriage, a baby. One major issue, Ted has no genitalia which mean no sperm which as you know means no baby. With the help of John, Ted seeks a sperm donor, no luck, and even a sperm bank, nope but when faced with adoption as their final choice the state informs Ted he is not recognized by law as a human hence opening up Pandora’s box. Basically Ted loses everything, well almost everything he still has John and Tami-Lynn and with the help of a young attorney, Samantha (Amanda Seyfried) Ted goes to court to claim himself human and not property as the courts seem to classify him.

Out for a fight Ted is on his way to becoming human that is until Donny (Giovanni Ribisi) gets involved with Tom Jessup at Hasbro with one intention, win the case against Ted, claim him as property then dissect him for his secrets in turn making millions for Hasbro. It’s a tough world out there and it gets even worse when Samantha finds out they are up against the toughest lawyer in the courts Shep Wild (John Slattery). This all leads Ted to sue for personhood and what better lawyer to represent him then the toughest lawyer in civil courts, Patrick Meighan (Morgan Freeman). A road trip to New York City leads Ted, John and Samantha on a journey they will soon never forget leading up to one big Jurassic moment and the ultimate fight for personhood. Ted still has many hills to climb since he is not exactly considered a role model in society but rather a Justin Bieber spin off. Yet after a chase scene at comic con, two gays, a Ninja Turtle and the attack of the Enterprise, all leading up to a code blue evening, love prevails, and one cuddly, marijuana smoking, alcohol drinking, foul-mouth bear changes the world. “Shit Happens”

This film is once again a laugh out loud, superbly directed and even more so written comedy that pokes fun at every race, religion, orientation and culture so if you offend easily and can’t take a joke you might want to go see “Max”. I can’t say it was as funny as the first but it sure is close and will have you laughing start to finish with a few gasps here and there. This is truly the imprint of Seth MacFarlane and for that reason alone deserves attention of which it will get on and off the big screen.

Wahlberg is classic, Ted the bear priceless, Barth is ideal and as for Seyfried this is one movie I love her in and that says a lot since I’m not her biggest fan. Ribisi is slimy of which he does the role well as he bargains a plan of attack with Jessup’s character. I walked into this film a bit tired, depressed and hungry for a laugh and thankfully for 115 minutes I laughed, forgot my worries and just plain enjoyed a funny movie filled with bad language, nudity, off the wall situations and bad manners all of which pulled me from reality into entertainment and enjoying every minute of it. Written and enjoyed especially for several of the animal scenes in the story with 3.5 paws out of 4 by Jon Patch.

More in this category: « Inside Out Me and Earl and the Dying Girl »
back to top

We have 502 guests and no members online