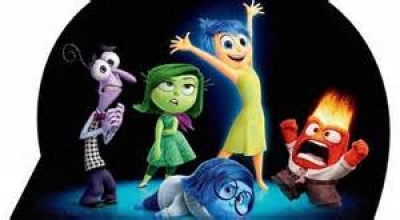 We had the opportunity to watch an opening animated short story of a volcano which I assume everyone will that goes to see “Inside Out”. The animation is gorgeous, the story at times a bit dark and depressing and the vocals well for the male volcano pretty good but the female not as much although I did appreciate the message of love and companionship. Thankfully it ends on a happy note but overall I thought it fell into the ocean rather than on land for the most part.

You ever wonder what is going on in the head of a newborn baby? Is anything going on? What is going on inside an adults head? Well as the baby grows up, in this case Riley (voice of Kaitlyn Dias) at age 11 we get to see exactly what is going on within her head and there is quite a bit! Joy (voice of Amy Poehler) everything happy and the main attraction, Sadness (voice of Phyllis Smith) needed in an emotional state of mind but not very popular, Fear (voice of Bill Hader) reacts to all those potential accidents and scary things in life, like big clowns, Anger (voice of Lewis Black) well we’ve all been there, some more than others and Disgust (voice of Mindy Kaling) very opinionated, all these 5 emotions live together inside Riley’s head and for the most part get along well thanks mainly to Joy. They all work in headquarters controlling the balls of memories and especially the core memories along with the islands of personality, these all make Riley, Riley.

When Dad (voice of Kyle MacLachlan) decides to leave all her fond memories behind in Minnesota to take a job in San Francisco, Riley and her Mom (voice of Diane Lane) are left to form new memories. Not a problem for the 5 emotions. Or is it? A new school, new friends, new home, all going pretty well until Sad steps in creating trouble in the islands of personality leading to all kinds of wrong when Joy and Sad get trapped outside headquarters on the islands of personality leaving Riley stuck in sad mood and the other 3 emotions helpless and afraid. Mom’s mind is in a state of concern and as for dad well he is still in sports mode.

Joy and Sad are looking for a way back to headquarters and along the way team up with Bing Bong (voice of Richard Kind), venture through Imagination Land, Dreamland, into the land of subconscious where the trouble makers live full of fears like broccoli, stairs to the basement and vacuums. Everything gets worse when Riley decides to run away and Joy falls into the dump and forgotten. Thanks to an act of courage and strength life for Riley could possibly have new memories, new islands and a new console for her emotions if Joy and Sadness can find their way home.

I enjoyed the film which is nicely directed and well written, the colors are vibrant and the animation typical Pixar, excellent, but in my opinion the film needed some more acts of humor. The film will work for young kids and the parents will appreciate the memories but for many parts of the story I thought it just got a bit lengthy causing a bit of a yawn. I believe the story spends way too much time in the head and not enough time outside of it with Riley and her family and friends. A pet would have helped throughout the story other than being added in the end. All the voices do a nice job with most of the focus on Joy and Sadness. I liked Sadness and the films casting choice for her voice but I only wish it would have projected some better humor into her character considering she was a main focus in the plot of the story. Albeit the actors who voiced these animated characters do it well. It just left me as an adult male wanting a bit more from the writers. Written and enjoyed with 2.5 paws out of 4 by Jon Patch.

We have 673 guests and no members online