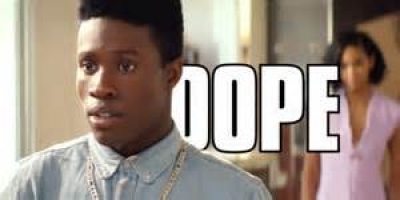 Revolt Films, Forest Whitaker’s Significant Productions and I am Other Entertainment present a 115 minute, R rated, Drama, Comedy, directed and written by Rick Famuyiwa with a theater release date of June 19, 2015.

The story centers around three best friends, Malcolm (Shameik Moore) extremely smart, Doggy (Kiersey Clemons) a lesbian and Jib (Tony Revolori), 14% African, all geeks living in present time but stuck in the 90’s hip hop music era and picked on by some rough bullies in high school. It’s senior year and Malcolm has one thing on his mind, taking his SAT and applying for Harvard. Well, he does have girls on the brain too! Especially when one day after school he gets confronted by Dom (Rakim Mayers) a street drug lord who in an odd way introduces him to Nakia (Zoe Kravitz). She has two things on her mind, take the GED test and move out of Inglewood, California for better things. Malcolm currently now has one thing on his mind, her!

Its Dom’s birthday and Malcolm and his friends get invited to the underground party. Drugs, under-age drinking, bad language and a shoot out later Malcolm’s life takes a turn for the worst at least one would think so. Several people shot, Dom is in jail and Malcolm is left holding the bag. Literally! A backpack filled with drugs and a gun. People start contacting him about the stash, two guys in a red El Camino and Dom from jail yet when Malcolm sways with Dom he is told to return the bag to AJ (Roger Guenveur Smith) and the boys club. At first when he arrives at the address he meets Lily (Chanel Imam) and Jaleel (Quincy Brown) which once again turns into a disastrous situation but in the long run leads back to some very familiar territory. All things at this point could have left Malcolm with no expectations of Harvard but sometimes it is better to keep your enemies closer in order to reach your goal.

Many questions get raised especially when we meet druggie slash hacker Will Sherwood (Blake Anderson) who asks some interesting questions. One being, why can’t whites use the “N” word? A user of drugs himself Will helps Malcolm and friends set up a black market account on line to sell the drugs. You ask why Malcolm would sell drugs since a good kid raised by a single mom in a bad neighborhood should know better. Actually what would a Harvard man do? Black market to black mail leading up to another question, is Malcolm student A or B? Watch the film and find out! Either way for a boy that never fit in it’s truly his turn now.

The story is well told making the audience think about life for many in the black community and the choices they have to make in order to survive. Nicely written and directed the story takes us down a very dramatic road with several comedic moments. Surrounded by sex, drugs, guns, hatred, greed and just plain stupidity we learn that through it all there is always a way out if you make it happen. No one else will do it for you if you don’t stand up for yourself.

The three main actors Moore, Clemons and Revolori steal their scenes and all are quite the threesome that really carries this story. Of course with Moore leading the pack into a world of darkness mixed in with light at the end of the tunnel. Kravitz is a bit sluggish acting at times but still tends to fill the shoes ordered. Mayers is short lived on the screen yet quite good at what he did as is Anderson. Imam and Brown. Overall a pretty large cast that is nicely presented and well received by the laughs and comments going on in the theater. I personally seemed to like the story and its meaning but still think as a movie for the big screen it could have been a bit more appealing to everyone. Written and enjoyed for its dramatic appeal with 2 paws out of 4 by Jon Patch.

More in this category: « Jurassic World Inside Out »
back to top

We have 449 guests and no members online