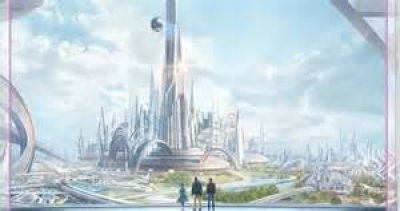 Walt Disney Studios Motion Pictures, A113 and Babieka present a 130 minute, PG, Action, Adventure, Mystery, directed by Brad Bird, written by Bird and Damon Lindelof with a theater release date of May 22, 2015.

The film starts off a bit strange in my opinion as Frank Walker (George Clooney) is trying to tell his story of when he was a young boy (Thomas Robinson) and how he met a very cute young girl named Athena (Raffey Cassidy) at the New York World Fair in 1964. Young Frank was there at the Hall of Invention with his innovative invention, a jet pack, which was not yet perfected so Nix (Hugh Laurie) would not let him enter into the contest and a potential prize winning of fifty dollars. Thanks to Athena though young Frank got even more than he bargained for, she presented him with a special pin, which eventually took him to a place of the future, he got the chance to visit Tomorrowland and from that moment on his entire life changed, not all for the good!

Also trying to tell her story with older Frank was Casey Newton (Britt Robertson) who happened to receive a special pin from Athena as well. Casey was like young Frank a dreamer which in many ways ended up getting her in trouble. Her father Edie Newton (Tim McGraw) was none too happy about her run ins with the law especially since it happened to involve NASA which is who he currently worked for. When Casey touched the mysterious pin she herself was propelled into Tomorrowland, confused yet delighted she sought to find out how this experience is even possible. Along her journey she meets some good guys yet some bad robots that want to diminish Athena and need Casey to tell them where she is. Casey never told but Athena led her to the doorstep of Frank hence how they met and how they both now end up on a journey of more discovery and a quest to fix the world from its demise. One problem, since the world tends to embrace the apocalypse is it possible to change its future? In the end they seek out to find dreamers that don’t give up and anyone that will feed the right wolf!

The story is a bit too long and in my opinion gets a little too complicated, hence at times loses your attention. I thought the direction was a bit off at times and the writing a bit lost in translation. There is a nice score, some wonderful effects and cinematography but I still felt like the Disney feeling you see most of the time in their films fell a bit flat. I mean the message behind the story is phenomenal but the delivery of it was a bit heavy and confusing. Overall I liked the concept and the presentation of the story but it all just had too many lows that made it a bit tiring at times.

I found Clooney to be a bit tiring himself in this story which made him seem a bit out of place many times. I think someone a bit more quirky like Johnny Depp or even Tom Hanks may have been slightly more interesting. Laurie doesn’t have a huge role yet he too seemed a bit tiresome as well. Thankfully the girls ruled this one and helped make the story more interesting and appealing to young and old. Cassidy really shows off her physical kick ass moves along with her softer side but it is Robertson that truly rules the world. I’m a fan of McGraw but he too seemed to take a back seat in this futuristic roller coaster story. Overall besides the fact that it’s a huge promotion for Disney parks it’s still a delightful yet lengthy and somewhat confusing film that should do ok in the theaters thanks to some major marketing although the trailers aren’t a lot to brag about either. Written and a bit disappointed with 2 paws out of 4 by Jon Patch.

More in this category: « Pitch Perfect 2 San Andreas »
back to top