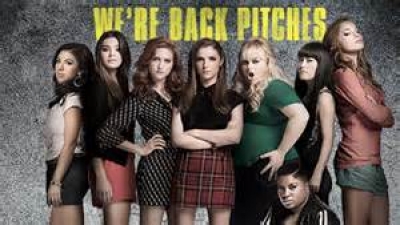 John (John Michael Higgins) and Gail (Elizabeth Banks) once again open the show as the girl group the Bella’s from Bardem University perform in Washington in front of a packed house for President Obama and First Lady Michelle Obama. When that one thing goes wrong on stage, Muffgate, the world gets to see more than they had ever planned for yet even though it wasn’t a terroristic act it was for some in the world pure terror. This incident cost the Bella’s their suspension at the University as an A Capella group, barred them from auditioning potential members and forfeited the remainder of their tour to the German group, Das Sound Machine, led by Kommissar (Birgitte Hjort Sorensen) and Pieter Kramer (Flula Borg). Although when Emily (Hailee Steinfeld), daughter of legendary Aca-champ Katherine (Katey Sagal) shows up to join the group the girls could not say no. Die-hard Chloe (Brittany Snow) along with Beca (Anna Kendrick) have figured out a way to win back the graces of America and the University and all they need to do is win the World A Capella competition which by the way was never won by an American group.

Meanwhile Beca with the support of her boyfriend Jesse (Skylar Astin) from the boy group, the Trouble Makers, secretly took a job working as a coffee girl for a very high strung boss (Keegan-Michael Key) at Residual Heat Recording Studios, causing her practice time with the girls to slightly suffer. Even though her boss is not a fan of Dax (Shawn Carter Peterson) the young employee with idiot ideas it helped Beca gain the opportunity to work with the likes of Snoop Dogg on his new Christmas album. Emily is constantly being pursued by Benji (Ben Platt) who stutters every time he sees her. Not a good thing to happen for a singer! Fat Amy (Rebel Wilson) is of course still fat and the cause of all gone wrong but is still being pursued by Bumper (Adam DeVine), member of the Toe Hangers and a campus security guard.

Chloe, Beca, Amy, Emily and the rest of the girls, Stacie (Alexis Knapp), Lily (Hana Mae Lee), Cynthia Rose (Ester Dean), Flo (Chrissie Fit) along with several other of the Bella girls realize they have no choice but to bond closer in order to get better and filled with total harmony so they set off for a retreat which happens to be run by Aubrey (Anna Camp), a graduate of the university and once member of the Bella’s. In the end the question remains, theoretically if the girls could win, yes, but realistically, no, at the World Championship. Either way it will have the Bella members past and present remembering the year 2015 for many generations to come.

I could not believe that Banks directed this film since it was truly better than the first. Not only can she act but apparently has talent in the directing field as well! Great writing, wonderful music and dance along with exceptional acting, this film is next to comedic perfection. Strong character development will help to reveal the story but it’s the music that will have your feet tapping for the deration of this film. The casting is well done of course with leaders Kendrick and Snow taking control. Out of control but in a good way is Wilson with her spot on antics but overall all the girls were a step above making this sequel a must see on the big screen. Remember to keep an eye out for a number of cameos and stay past the credits for an added surprise and a true test of one man’s voice. Written and absolutely enjoyed with 3.5 paws out of 4 by Jon Patch.

More in this category: « Mad Max: Fury Road Tomorrowland »
back to top

We have 732 guests and no members online