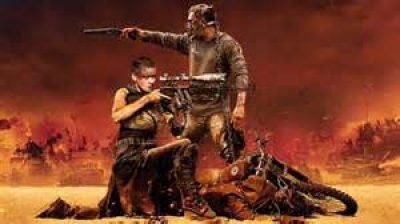 Wow what a road trip these 2 hours of cinematic mayhem is as we follow the run for her life journey that Imperator Furiosa (Charlize Theron) is on with the help of Max Rockatansky (Tom Hardy). Max is running for his life that is surrounded by fire and blood in a world of both living and dead. Earth has run out of water except for in the community of Citadel which is run by a war lord known as Immortan Joe (Hugh Keays0Byrne) who also happens to control the oil supply. When Max is captured by Immortan Joe’s men, the war boys, he is tortured and kept as a blood back that is until he eventually breaks free.

In an act of treason Furiosa has fled Citadel and taken Immortan Joe’s five fertile women, The Splendid Angharad (Rosie Huntington-Whiteley), Toast the Knowing (Zoe Kravitz), Capable (Riley Keough), The Dag (Abbey Lee) and Cheedo the Fragile (Courtney Eaton) in hopes of reaching ‘the green land’ before Immortan Joe discovers they’re gone. Too late! He does and soon chases after Furiosa along with an army of his men. Joe wants his women back for several reasons and will stop at nothing to get them. Fast revved up cars and trucks that resemble porcupines on steroids, explosives, bloody battles, some damn ugly warriors that look like they belong in this apocalyptic world, a crazy playing guitarist and many other odd and creepy moments later the race is on for Furiosa to reach ‘the green land’ which is the homeland she knew as a child, protect the women and with the help of one nameless person along with Nux (Nicholas Hoult) who left the dark side thanks to a beautiful woman they all fight to find salvation in a better world.

Passing through crow city, running from the bullet farmers and Immortan Joe’s war boys, Furiosa and her small group make it to the green land where they meet several women only to find out that what they searched for may not be what they expected to find. If you can’t fix what’s broken you’ll go insane and Max and Furiosa have formed a bond and are trying their best to make life as normal as possible and that would mean a world without a war lord like Immortan Joe, Rictus Erectus (Nathan Jones) and so many of his other war boys. Yet in the end they all realize there truly is no place like home. Where must mankind go within this waste land in search of their better selves?

This story is high on action and adventure from beginning to end. It has a frantic score, some nudity, language, thrilling situations that lean on the side of gruesome along with some phenomenal chase scenes and special effects. Think “Saw” add in a little of “The Hills have Eyes”, “Furious Seven” and you have a concept of what this film offers plus a whole lot more. Great cinematography, well written twists and turns and a race for survival later, this film is a great male demo for a night out on the town. Theron was brilliant and kick ass, sporting a shaved head and full of female power. Hardy starts off with a similar look from his “Batman” days but later takes it off proving that he can kick ass just like the rest of the action starts out there with high grossing films. Which I’m sure this movie will have a nice box office draw to only add to his star power. Hoult was exceptional playing both sides and Keys-Byrne truly of the side of creepy. Kravitz, Keough, Lee and Eaton are all spot on with their role but it is Huntington-Whiteley that tends to steal many of her group scenes. Overall this film rocks, literally, from beginning to end and is truly a race from hell that leaves the door open for part 2. Written and thoroughly enjoyed with 3.5 paws out of 4 by Jon Patch.

More in this category: « Bravetown Pitch Perfect 2 »
back to top

We have 302 guests and no members online