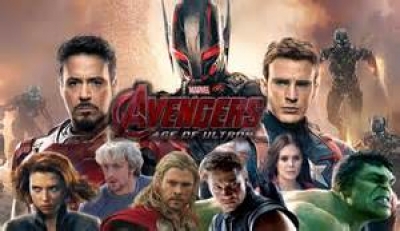 There’s a battle going on at the Hydra Research Base in Europe between Iron Man/Tony Stark (Robert Downey Jr.), Thor (Chris Hemsworth), Hulk/Bruce Banner (Mark Ruffalo), Captain America/Steve Rogers (Chris Evans), Black Widow/Natasha Romanoff (Scarlett Johansson), Hawkeye/Clint Barton (Jeremy Renner) and Hydra’s number one thug Stucker (Thomas Kretschmann) along with the twins Quicksilver/Pietro Maximoff (Aaron Taylor-Johnson) the fast one and Scarlet Witch/Wanda Maximoff (Elizabeth Olsen) the weird one. It’s not until Stark enters the building does he find the scepter but after being mind warped by Scarlet Witch does he see the future, blaming himself for the death of all his friends.

He knows he has to do something so he takes the scepter back to his lab discovers its secret and decides by coercing Banner that within this secret is peace in our time. Later at a party the secret thanks to Stark if revealed and it’s not very friendly actually it’s Ultron (voice of James Spader). Soon the party is over, there are no longer any strings on Ultron and the future for mankind and the Avengers is possibly extinction. Apparently Stark’s vision was not what he thought it would be or was it? Ultron’s plan with some help from some allies was to hunt out the Avenger’s and tear them apart from the inside.

On the African Coast in a salvage yard the battle continues between Ultron and the Avenger’s causing several of the members to go into a mind warp with several repercussions especially when it came to Hulk who went crazy on the citizens of the city. If anger management doesn’t help then surely Romanoff will! In a battle between Iron Man and the help of Veronica against the Hulk once again destruction is everywhere. One scene actually resembled that of 9/11 when the towers crumbled as the people of the city fled covered in ash running for their survival. Not sure if the director planned that moment in the film but it was very similar to the real horrific attack on America in September 2001.

Thereafter most of the group take refuge in a safe house which ends up revealing some secrets about Hawkeye but Ultron has moved on to Seoul Korea where he threatens Dr. Helen Cho (Claudia Kim) to fulfill his evolution. As the saying goes what doesn’t kill you makes you stronger and Ultron has found a new power and new life. All for one the Avenger’s once again battle Ultron and his army of metal robots in order to save earth starting with Sokovia first. Humans and animals flee in fury as they run for their lives and thanks to the Avenger’s some may make it out alive. In the end lives are lost yet a new group of Avenger’s at the new headquarters in upstate New York are ready to train to fight yet another new day. Wait for the credits to see what’s in store for the next war on the Avenger’s.

This film is action packed from beginning to end and does not slow down for a minute. The direction is the same as always, exceptional, as is the writing that contains some very funny moments. Some jokes may seem displaced but for me they worked well especially between Stark and Rogers. IMAX and 3D are one huge benefit to this film since the action is constant and the battles move very quickly almost too quickly. Due to this element of the film it may make the audience see it again just so they are able to see so much that’s going on that they may have missed the first time. This film is sure to be nominated for special effects come Oscar season with the chance for wardrobe as well. High octane scenes with a great score only add to the reasons that this film will gross high at the box office and the momentum doesn’t seem to be slowing down.

Downey Jr. is once again perfect and with Evans bantering back and forth between their bromance sequences the two are superb adding humor to such a wild action ride. Hemsworth adds strength and muscle and Ruffalo compassion, confusion and anger of course that all work in his favor especially when in the presence of Johansson’s strong yet feminine character. Renner although as stated is the old man of the group the writers play on it in several different ways and he develops the character to perform it with perfection. Spader adds a bit of levity to the voice of Ultron but I almost would have preferred something deeper and more evil. Jackson and Cheadle as well as a few others have small roles but truly balance this action adventure. Taylor-Johnson and Olsen are a superb addition and Olsen by the way once again out-shadows her twin sisters by a mile as an actress. Overall the film is one big action packed rollercoaster ride that seems to go on forever, in a good way. Written and enjoyed with three and a half paws out of four by Jon Patch.

More in this category: « The Age of Adaline Hot Pursuit »
back to top

We have 669 guests and no members online