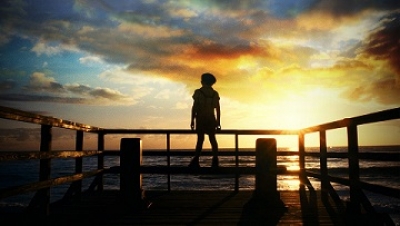 Pepper Flynt Busbee (Jakob Salvati) had always been a little boy. But

nothing seemed to stop him with his dad, James Busbee (Michael Rapaport), always

having his back, teaching him at a young age that you can do anything if you

Henrie) wanted nothing more than to go and fight for his country. Finally of age

and ready to enlist only one thing kept him from his dream on the battle field,

flat feet. Unable to go to war his father has to take his place leaving Pepper

behind. Devastated but hopeful Pepper prepares for when his fathers tour is

finally over. On the last days of James Busbee being over seas his platoon is

attacked and making him a prisoner of war. Upon finding out the news Pepper is

likely his father will return home. Through a heart touching journey of one

home you will truly feel every emotion with him. This movie was one of the best

I've seen in awhile. Jakob Salvati did an extremely amazing job of making you

feel the emotions he was going through. I wouldn't be surprised if this was his

big break movie. This movie made you laugh, made you angry and made you cry.

Of Waverly Place in this more serious roll. It really kept your attention the

whole time, putting faith in you and making you hope the whole time that this

little boy would really move mountains. I give it three and a half paws out of four. Lexi Lapp

More in this category: « Unfriended The Water Diviner »
back to top

We have 218 guests and no members online