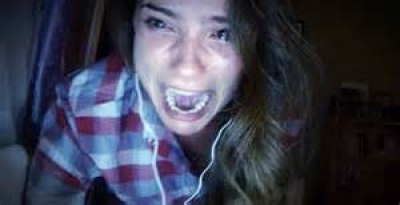 On April 12, 2013, in Fresno California, Laura a young high school student decided to take her life because of the effects of cyberbullying. Exactly one year later, five classmates Blaire (Shelley Hennig), Mitch (Moses Jacob Storm), Adam (Will Peltz), Jess (Renee Olstead) and Ken (Jacob Wysocki) from Laura’s school are in a chat room discussing what all kids do at that age.

Suddenly a mystery person with no picture appears on the chat room and no matter what they do to remove the intruder nothing works. They think it could be their other friend Val (Courtney Halverson) so they call her into the chat. Yet when the friends start to receive private messages from the mystery person who eventually claims to be dead Laura under a username of Billie227 the friends start to suspect each other as playing pranks. Yet when the pranks start to become more real from an outside person not even a glitch in the system would explain what is happening and how this person knows so much about everyone.

As the conversation becomes more intense Laura decides to play a game and in doing so one by one the friends begin to disappear. You can’t stop the game and you can’t leave the chat room because if you do then everyone will die. But as the game becomes more intense and the players start to lose their own sanity, the lies, lies, lies become revealed and the truth does not exactly set them free but rather kills them in gruesome ways.

Obviously this film has an extremely low budget and no special effects, change in scenery or wardrobe but rather kids chatting on skype for slightly more than an hour. For a film to come out with a timely subject as bullying and the Internet that is brilliant of its own but even so I wish the story would have left the chat room and moved on to the students lives and how death hunts them down. Think “Final Destination” films yet no bells and whistles of death tracking them down. In this story it knows exactly where to find you. So, nice concept and fairly well directed and written for a film that goes nowhere other than Skype. I almost felt like I took a computer course for an hour rather than enjoyed a low budget film. Although I must say that the acting was good, much more so than I thought it would be, with Hennig taking the top award out of the group. If you looking for a cheap thrill rather than a scare and feel like watching horror meets a computer near you on the big screen and are in the age group of 12-29 you might enjoy this film than most others that know better. Choose wisely since a night at the movies is not cheap! Written and enjoyed for what it’s worth with one and a half paws out of four by Jon Patch.

More in this category: « True Story Little Boy »
back to top

We have 889 guests and no members online