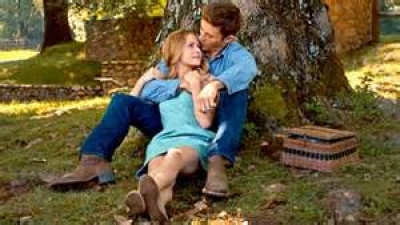 Luke Collins (Scott Eastwood) is a competitive bull rider in North Carolina but when he got thrown from one of the meanest bulls in riding, Rango, life for Luke changed a bit. One year later Luke is back to competing in the toughest sport on dirt. One evening at a competition after riding a bull his hat fell off into the audience when soon thereafter a young beautiful girl, Sophia Danko (Britt Robertson), hands it back to him yet upon one glance he tells her to keep it for him. Later at the Buck N Bull bar the two meet, she keeps the hat and sparks begin to fly. Although when Luke discovers Sophia id leaving for New York to attend an art internship he begins to question if he should consider wasting his time on something that could not be.

A visit to Wake Forest University, cowboy hat and jeans and a bouquet of flowers in hand Luke takes Sophia on an official date. On the way home when they notice a car off the side of the road Luke drags an old man, Ira Levinson (Alan Alda) from the burning car while Sophia grabs a box from the front seat. After an emergency trip to the hospital Luke leaves while Sophia decides to wait for news on Ira yet while waiting she discovers that within the box were old love letters from the 1940’s written to Ruth (Oona Chaplin) from a very young Ira (Jack Huston). When she is told Ira will be fine she visits him then from that day on and continues to visit him and read the old letters to him since he was unable to do so himself.

Ira loved Ruth from the moment he saw her yet when he left her to go to war he did not come back the same man yet after the turmoil of his news they both decided that love would conquer all. Ruth loved art so Ira would take her to Black Mountain College where she would be able to enjoy it even more. When Ruth and Ira got married and bought a home their house was filled with art yet one thing was missing, a child. As a school teacher Ruth was surrounded by children but none as her own until she tried to befriend a young student named Daniel McDonald (Floyd Herrington). Having Daniel at their home then losing him only made the old war wounds become even more prevalent in their lives.

Luke has moved from 26 to number 9 in the bull riding world and does not want to stop until he’s number 1. Now choices must be made on whether he quits riding or Sophia leaves her dreams of New York to stay on a ranch in North Carolina. It’s strange how people so close become strangers. I can attest to that personally, falling in love then being forgotten or at least replaced. I guess all people want to do is be happy but it’s sad when they realize that happy was in front of them all along and it could possibly be too late! Love requires sacrifice always and maybe if people focused on what they have rather than don’t then love would prevail more often and happiness would flourish. Luke needs to decide 8 seconds versus his entire life. History tends to repeat itself yet when you realize what matters was in front of you the whole time maybe then history ends, all for the better. In the end when Luke and Sophia end up at an art auction they soon discover that their lives will be forever changed.

I had a very long day with having a friend’s dog die.   I tried to help Charlotte recover only to have his faithful friend of 15 years pass. I bumped into my ex who I once loved dearly for the first time in months at a very unlikely place and then amongst many other episodes of trials and tribulations in the day I screened this love story. Through it all I really loved the story, a beautiful novel by Sparks of course with some nice writing but mostly superb direction and a great score with an array of bulls, horses and cowboys to keep everyone entertained. This film deals with two different love stories in two different times and places. You will smile, laugh and even cry as this story affects every ounce of your emotions especially if you have loved and lost. I absolutely even dealing with my own drama day enjoyed this film.

Eastwood was amazing even more so thanks to his father Clint’s similar looks and talents. Robertson who I became a fan of from her work on the television show “Under the Dome” was a nice mix for Eastwood. The two actors really complemented each other from start to finish. Huston and Chaplin also were perfect together making their lives seem like the art they loved and the letters they read all as real and unforgettable making everyone in the audience want to have the love they shared together. Alda is such a great actor and of course he does not disappoint here as well while his character reflects on the letters he once wrote to Ruth. Even though the story is over two hours it makes it worth watching as it leaves a lasting impression of love in your heart and soul. Written and impressed with three out of four paws by Jon Patch.

More in this category: « Ex Machina True Story »
back to top