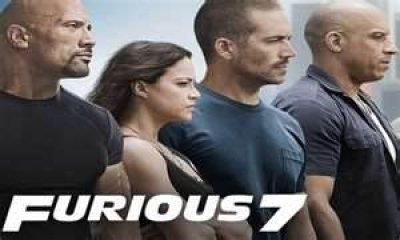 In London England a dangerous man named Deckard Shaw (Jason Stratham) once said in order to see a glimpse of your future then look behind you. As he leaves the local hospital he informs the staff or what’s left of them to take care of his brother Owen (Luke Evans). This point on Deckard has one thought which is revenge towards the people that harmed his brother.

On an open road Dominic Toretto (Vin Diesel) and Letty (Michelle Rodriguez) are on their way to the race wars something they helped create but since Letty lost her memory she of course knows nothing of the races or her past life with Dom and friends. Soon thereafter Letty leaves Dom in order to find herself again or so she hopes. Meanwhile Brian O’Conner (Paul Walker) is racing his son to school in his new minivan. Mia (Jordana Brewster) his wife has a secret but is looking for the right time to tell him but waiting for the right moment may be too late!

At the Diplomatic Security Services building in Los Angeles Hobbs (Dwayne Johnson) is working late and much to his surprise he receives a visit from Deckard. One violent shootout and fist fight later with the help of Hobbs colleague, Elena (Elsa Pataky), the sins of London has wreaked havoc and destruction on the D.S.S., Hobbs and Elena. With a target on the heads of Dom and his team by Deckard, Brian sends Mia and his son into hiding. Yet with one member killed Dom and his team now seek to bring Deckard to justice. That is until Mr. Nobody (Kurt Russell) gets involved with a proposition. In return for the teams help to retrieve Ramsey (Nathalie Emmanuel) and the God’s Eye from her captive Moses Jakande (Djimon Hounsou) Mr. Nobody promises to help the team capture Deckard. Dom and the team which includes Roman (Tyrese Gibson) and Tej (Ludacris) are on board and in a daredevil flight in cars, some of the most intense chase scenes on screen and some twist and turns later the party triangle begins which includes everyone out to kill everyone else.

Hello Kitty happens to be the best hacker in the world and with the God’s Eye her powers are endless hence why everyone wants her. Off to the Middle East the team is out to retrieve something lost, well kind of, they know where it is but they need a plan to get it but little did they know two of them will take a jump of their lives in a one out of seven long shot. Oh the enemy of my enemy is my friend. True or False? Obviously some people have no friends but they do have family and that’s what they need to hold on to no matter the cost. Back to war on the streets where it all began the team takes one last ride against a predator and his army in order to protect the ones they love and bring justice back home for good. It’s never goodbye amongst brothers.

The film is not long on dialogue but it is truly filled with some of the best action scenes that I’ve seen in quite some time. Explosions, car chases, fist fights, CGI for days this film is action packed from start to finish yet still being able to make sense of a plot which is extremely brilliant. The CGI at times may have fallen a bit too heavy in terms of visual believability but that aside it is awesome to watch in IMAX. A great score with some superb written lines this film is definitely going to be another box office success. Tastefully done they even pay homage to a wonderful actor, Paul Walker, with some old footage and spoken words. He will be missed. As for the actors I can truly not say anything bad about any of them since by this time this Furious family is nothing less than exceptional from the leads, to the supporting actors to the extras. Overall a movie filled with what it sought for action, action and more action. Written and enjoyed with three paws out of four by Jon Patch.

More in this category: « Get Hard Effie Gray »
back to top