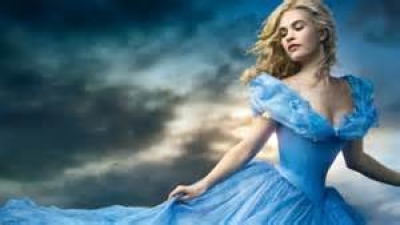 First the audience was treated to Frozen Forever, a short film celebrating the birthday of Anna before once upon a time began and the story of Cinderella. The short was cute, delightful and a wonderful tribute to the characters of Frozen, the animated film that broke all-time records. Watch for Frozen 2 coming out in the not too distant future.

Young Ella grew up in a beautiful countryside home to a loving mother (Hayley Atwell) and a hard-working, caring, merchant father (Ben Chaplin). She was not only beautiful but gifted in so many ways along with loved by the animals in her life. Yet throughout the years of love and happiness in their home sorrow entered causing her mother to pass on but in a whisper of her last breath she informed Ella to have courage and to be kind in her life and magic will always follow.

Sorrow turned into memories as Ella (Lily James) matured and her father in pursuit of his own happiness decided to marry once again. Into the home came Ella’s new Stepmother (Cate Blanchett) along with her two daughters Drisella (Sophie McShera) and Anastasia (Holliday Grainger), both not big on looks nor brains. Oh yes and not to forget their cat Lucifer who eventually became a bit of a threat to Ella’s four mice friends.

When Ella’s father went away on business he never returned and her Stepmother literally banished Ella to the attic in this 200 year old home. Now without her father and a way of life for the Stepmother and her two daughters cuts had to be made to the staff making Ella the slave of the house. If for anything her new role helped to create a distraction for her own grief and in fact her stepsisters created a new name for her, Cinderella, that’s what happens when you sleep to close to a fire.

Later on a horse ride through the forest Ella stumbles upon a young apprentice named Kit (Richard Madden) after she first tried to help a stag escape from the King’s (Derek Jacobi)hunters. Conversation later and of course an attraction Ella had no idea Kit was actually the Prince. As she rides away giving no name to the Prince he realizes he knows he wants to see her again. In a proclamation to the townspeople he announces that the kingdom will throw a ball for the people yet the Prince hopes to find his unknown woman. Unfavorable to the dying King he wants his son to take a princess bride not a commoner. Her stepmother and stepsisters have left for the ball and obviously left Ella behind in sorrow and tears.

A ragged woman appears from nowhere asking for some bread and drink of which Ella complies not much later this woman, Ella’s Fairy Godmother (Helena Bonham Carter), turns a pumpkin into a carriage, mice into horses, lizards into Footmen, a goose into a Coachman, her mother’s ragged and torn dress from pink to a blue beautiful gown and her slippers in glass shoes. Unrecognizable to her Stepmother Ella is off to the ball with knowledge that after the last stroke of midnight Ella’s life would return as it once was. As she entered the kingdom and stepped down the staircase to the main floor the Prince new he found his wife and the entire kingdom had one question, who is she? Grand Duke (Stellan Skarsgard) has promised the Prince to marry Princess Chelina (Jana Perez) but the Prince knew where his heart belonged with or without the blessings of his father or kingdom. When midnight approaches at the ball Cinderella flees leaving behind a glass slipper.   The prince later announces his search for this unknown woman and sends the Duke and Captain (Nonso Anozie) to find her. Thanks to a song, four mice and forgiveness a country girl marries an apprentice and a queen and king have found true love.

Of course as you read my above synopsis of this film you can tell that it follows the exact storyline of Disney’s animated Cinderella story leaving no privileges in changing the story from start to finish. Of course I know exactly what becomes of this plot but all that aside it is beautifully directed, written and scored. The cinematography is breath-taking and the acting impeccable. Blanchett is true evil, McShera and Grainger spot on, Bonham Carter is typical but as always great, James not only naturally beautiful but talented, Madden is attractive and romantic, Jacobi wonderful along with all the other characters in this story. Bottom-line this film has its moments that will entertain you, make you smile, make you laugh, lift your soul to that of euphoria thanks to the beauty of the story, dreams and hopes of the main characters but mostly leave you to believe that with a little courage and kindness true magic is possible. Written and enjoyed with three and half paws out of four, I’m Jon Patch.

More in this category: « Chappie Insurgent »
back to top

We have 421 guests and no members online