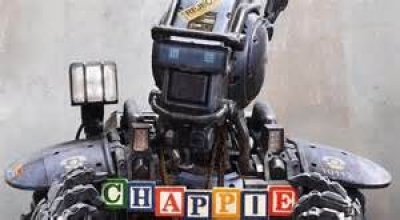 Eighteen months earlier the city of Johannesburg, South Africa is out of control with crime. Yet thanks to the rebirth of law enforcement of a futuristic kind life is being restored and maintained by the first robotic police force known as Scouts which were developed by Deon Wilson (Dev Patel).   Tetravaal Corporation has developed, manufactured and sold these Scouts in Johannesburg, under the executive eyes of Michelle Bradley (Sigourney Weaver). Yet the corporations other division, Moose, led by developer Vincent Moore (Hugh Jackman) is not doing as well because the robots are expensive, big and quite ugly.

On the streets drug lords, car thieves, gunman and overall criminals are still rampant yet thanks to the Scouts they are maintained for the most part to a smaller perimeter. That is except for Hippo (Brandon Auret) who has a way along with his gang of trying to control the city by wanting everything he can take. Enter Ninja (Ninja), Yolandi (Yo-Landi Visser) and Yankie (Joe Pablo Cantillo) they happen to be at war with Hippo for the sum of twenty million dollars and if they don’t pay up in seven days they die.

Yolandi gets an idea, kidnap Deon and steal his remote to turn off the Scouts in order to wage a criminal attack on the city for millions. One problem when they kidnap Deon they suddenly get Chappie (Sharlto Copley) once known as Scout 22 which happens to be a test robot with the beginning consciousness of a child. Chappie acts human in every aspect of the meaning but when Ninja and the gang decide to take him over their methods of teaching Chappie is nothing but criminal. That is except for Yolandi who happens to take on a motherly role for Chappie. As for Ninja and his train of thought Chappie is now gangster number one.

Chappie struggles with his identity and even though made of titanium he truly is not physically or mentally indestructible, as he thinks. He will not kill a human unless within self-defense as a last resort but thanks to the mind set of Ninja he has no problem in putting them to sleep, so to speak. Chappie has the mind of a child and tends to mimic and pick up human behaviors quite easily as time goes on. Yet through all the distraining by Ninja who has grown to be known as his Daddy he still held a respect for his maker Deon and his mommy Yolandi. Not until Vincent who has been jealous of Deon’s success decides to install firmware into the computer systems that control the Scouts does life take a turn and the big and ugly Moose takes control. In the end Chappie searches for a new body since his is dying, bad man Vincent tries to destroy Deon’s legacy, and consciousness get transferred creating more than one black sheep.

I enjoyed the story yet it has been done several times. It had the strength of Steel Robots, the cuteness of Wall-E and the suspense and technology of I Robot. Either way even though the characters accents got a bit out of hand many moments seem to reflect other films this one is still quite mesmerizing and intriguing overall. Nice direction with some creative writing and this film comes across with all the genres of film, action, drama, comedy, thriller and more. It left me intrigued with the technology of these robots and the thoughts of how far we as a species are from developing this concept of robots to protect the world. The movements of Chappie were absolutely astonishing to watch on the big screen.

Patel who I just watched in the film, “The Second Best Exotic Marigold Hotel” was just as brilliant in this film as he was in the other. Ninja, Visser and Cantillo were all great but I found it a bit strange that as the story progressed I found myself routing for the bad guys. Jackman was a bit on the quiet side with a touch of a bit strange but in the end he delivered. Weaver was sufficient and Auret off the wall but along with them and a cast of supporting characters and extras, I give this film two and half out of four by Jon Patch.

More in this category: « The Second Best Exotic Marigold Hotel Cinderella »
back to top