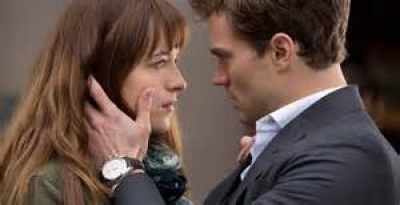 It’s sometimes difficult to take a bestselling novel and turn it into a top grossing film and even though I never read the books I think this on screen rendition of dominance mixed with submissive behavior between Anastasia Steele (Dakota Johnson) and Christian Grey (Jamie Dornan) may have missed its mark slightly but surely not its audience.

Anastasia lives in Portland, Oregon with her roommate Kate (Eloise Mumford) both are attending Vancouver and about to graduate. When Kate has the flu she asks Anastasia to drive to Seattle to interview the world’s most eligible billionaire bachelor Christian Grey. When she arrives at the Grey House for the interview right from the start everything is awkward but through it all a slight spark seemed to have emerged between the two. When Anastasia returns home to Portland her days at school and working at the Clayton Hardware store begin to change as Christian decides to show up in town to purchase three very suspect items, ties, rope and tape. You figure it out! It’s not difficult!

Soon the two begin to forge a deeper relationship discovering many things about each other. Some very in depth and hidden personal secrets not known by anyone else are exposed amongst the new couple. The gifts begin to arrive, sightseeing, the touch, the kiss, the whispers and suddenly the contracts. The first to make sure any private moments between the two are just that, private, and not to be mentioned to anyone else. The second, well that one is a bit more erotic and for Anastasia difficult to comprehend. When Christian reveals his play room to Anastasia and the fact that he wants her to move in on a part time basis supplying sex when needed but no real romance Anastasia is faced with some very personal decisions.

Mrs. Grey (Marcia Gay Harden) stops by one day discovering the two together and approves that her son finally has a girl. Speculation by society was rumored to think he may be gay! Based on his toys and his need to dominate a woman it is not looking to be fact about is rumored orientation. Contract negotiations take place between Anastasia and Christian but the erotic sexual encounters continue even though nothing has been signed on the dotted line. Both naked, Anastasia bound with her eyes covered as she is flogged, spanked and dominated during sex still continues even without her ink to paper or in her case pencil. He meets her parents as she has met his and for some reason questions become apparent of who is actually changing who since their personalities are changing yet their desires continue. Still secrets come out, teasers are plentiful both sexual and mentally and both she and he are stripped of who they thought they were or could be. Always remember the codes of red and yellow and to use them when appropriate. Asking sometimes of just why someone would want to physically punish another person they love especially when one half of the two still continues to say you can’t love me. In the end the elevator opens the word is “no”, the doors begin to close, Anastasia? Christian?

Like I said I did not get to read the books but even though I did not I can still say I enjoyed the movie. As a friend of Dakota’s family I did stop to think how her grandmother and my friend and founder of Shambala Preserve, Tippi Hedren, felt about some of the intense sexual scenes in the film. I thought the direction was well done but thought the writing at times was a little weak but the actors and their bodily moments, expressions and sexual encounters tends to make up for the loss of dialogue. Wardrobe was simple, photography a bite graphic of course and a nice soundtrack all lead up to a wide variety of eyes wide open so as not to miss a breath.

A breath that emits from Johnson’s character making the audience feel her joy, pleasure, pain, just every ounce of lust into love for her leading man Dornan.   You can see the resemblance of her real life parents, Melanie Griffith and Don Johnson, in Johnson and you can feel the sense of innocence mixed with exploration she brings so intently into her character. At first I questioned if Dornan was the right guy for the part but as his character develops any doubt about his capabilities to dominate an audience goes away as well with or without the use of his naked behind. Anyone else in the film such as supporting characters are all fill but are truly an asset to the back drop of the leading characters’ lives. Overall I expected a movie that would play out as if reading a book and for me it did and that’s not a bad thing. Written and erotically enjoyed with two and half paws out of three by Jon Patch.

More in this category: « Kingsman: The Secret Service McFarland, USA »
back to top

We have 902 guests and no members online