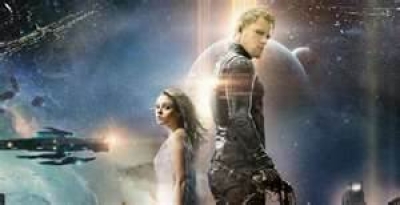 After her husband is killed, Aleksa (Maria Doyle Kennedy) stricken with grief leaves her family behind except for her sister to give birth to a baby girl in a boat at sea under the stars, she named the child Jupiter per her dead husband’s wishes. Years later Jupiter (Mila Kunis) has grown into a beautiful young woman only to hate her life working as a cleaning woman with her mother and aunt. That is until her entire life changes when she is sought after to be killed by three heirs Balem (Eddie Redmayne), Titus (Douglas Booth) and Kalique (Tuppence Middleton) all in fear of her taking control of their empires n a distant world far away from Earth. Thankfully for Jupiter she has a protector named Caine (Channing Tatum) who is out to watch over her majesty. Half animal yet half human Caine is very swift with in flight with his gravitational boots as he fights against the keepers in order to protect Jupiter. He takes her to the house of titles, a place worse than the DMV on Earth, in order to make her official as the true majesty to their world. Yet Jupiter has a tendency to fall for guys that don’t fall for her hence Caine who happens to be a spliced being. Even though Jupiter likes dogs their fate is uncertain.

All three of the heirs are after control from Jupiter and fill her mind with lies and deceit. Some will deceive her, some try to marry her and some just outright threaten her earth family to kill her off like that of the heirs true mother. Odd how the more you care about someone or something the more it seems the world tries to hurt you for it! It seems to be so true especially in my life! Maybe if we were half animal half human the world would be a better place! 445 AM time to forget, time to wake up and time to clean the toilets but who cares for today is the day when you won’t hate your life and you may own the world or at least a piece of it.

The Wachowski’s have already won me over a while back when they brought out “Cloud Atlas”, a film that should have in my opinion received much more praise for its content than it did. I had low expectations on this film, Jupiter Ascending, based on the trailers; I figured it would be an over-done CGI disaster. Done in 3D and yes it is a special effects film from start to finish but far from a disaster actually I really enjoyed it and thought it had a lot of CGI but most of it was a visual splendor on the big screen. I thought the writing loses its way towards the end but the score and effects in the film are stellar.

As for the cast and the main characters, Tatum is great to watch in this role, yet a little stiff at times he does a nice job. Kunis is appropriate but I still think there could have been another actress maybe a new face that could have blossomed a little more than Mila. Redmayne fresh off his nomination for “The Theory of Everything” is a little odd, grant it his role is supposed to be a bit psychotic but based on the audience reaction he comes off a bit more funny than scary. Sean Bean who plays Stinger seems to come and go from the story a bit rather than making him a more prominent part. Booth has the looks and is not bad in his role but like Kunis there might have been a better fit. Middleton doesn’t have a huge role but she pulls it off well as does Kennedy. Some of the extras I felt were a bit off but overall the supporting roles were spot on. In the end I have to say I absolutely enjoyed this action adventure with a slight twist of attempted humor that sometimes works but sometimes does not yet based on the visual effects and the large amount of action I would definitely go see this film in the theater. Even with its cliché moments and stolen scenarios from some other sci fi type films this movie is quite enjoyable. Written with two and half paws out of four by Jon Patch. Would have been three if the casting was slightly better along with a few short comings in the script yet still not enough for me to not recommend it!

More in this category: « Blackhat Seventh Son »
back to top

We have 258 guests and no members online