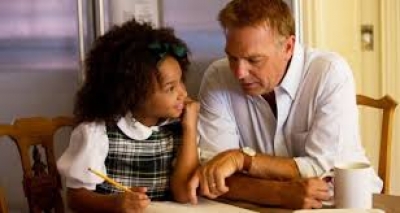 Inspired by true events this story about the fight for custody of a young mixed girl, Eloise Anderson (Jillian Estell) is not only a much needed topic of conversation but overall just a beautifully directed, written and acted story. Elliot Anderson (Kevin Costner) has just been informed that his wife Carol (Jennifer Ehle) has died from an accident. Years ago Elliot had lost his only daughter in freak occurrence while giving birth to Eloise. He is still dealing with the loss of his daughter when now suddenly his wife. He now is left along to care for his Granddaughter Eloise.

Elliot has a drinking problem and a lack of knowledge of how to care for a young girl since his wife Carol was the true caregiver. He learns in time the ins and outs of caring for the girl, taking her to Preparatory School, brushing her hair, making sure she brushes her teeth and more. Although when he realizes he cannot drive drunk and care for Eloise, Elliot hires Duvan Araga (Mpho Koaho) a math tutor to not only help Eloise with her studies but chauffeur her to and from school. Her father, mainly considered a “street nigger” was never around to support the child and the last thing he is able to do is care for a young girl due to his drugs and the people he associates with in the neighborhood.

Yet when Rowena Jeffers (Octavia Spencer) the other Grandmother on her father’s side to Eloise steps in trying to take the young girl from Elliot to raise her in the black community, the gloves come off while Elliot eventually battles Rowena in court for custody. A chain is only as strong as its weakest link and Rowena, Reggie Davies (Andre Holland) the girl’s biological father is in no means ready to raise Eloise. When they go to battle in a court of law alongside their lawyers Jeremiah Jeffers (Anthony Mackie) and Rick Reynolds (Bill Burr) both sides of the family one black, one white, they must do everything possible in front of Judge Cummins (Paula Newsome) in hopes of getting custody of Eloise. Overall though what one and actually many need in life is a chance to breathe.

I absolutely loved this film, filled with great writing, making the characters and situations come alive. The direction is superb but the situations that the writers create amongst the characters that deal with love, trust, family, understanding, drugs, alcohol, black and white. I have to mention that I also think the sountrack is worth looking at even more so than the score. Costner is superb from start to finish and is a perfect actor for this role. Also a fan of Spencer she truly helped bring a bit of humor to the film in some intense moments and as always is superb bringing a sense of comfort to her character. Estelle was phenomenal; as was Aragua, along with a great cast of supporting character make this film more than worthy of seeing it on the big screen. Written with 3 and half paws out of 4, I’m Jon Patch.

More in this category: « The Boy Next Door Black Sea »
back to top