The Boy Next Door Featured 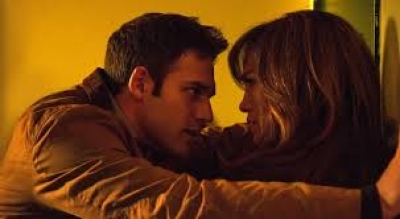 Claire Peterson (Jennifer Lopez) is a classics teacher at John Monroe High School where her son Kevin ((Ian Nelson) attends. She is recently going through a divorce since her husband Garett (John Corbett) has been sleeping with another woman in San Francisco. Currently he says that has ended and wants to renew his relationship with Claire. Claire is not so certain she can ever trust him again. We all know what that’s like, once a cheater always a cheater! Agree?

Recently Noah Sandborn (Ryan Guzman) has moved in next door to take care of his ailing Great Uncle (Jack Wallace) since his parents were killed not too long ago. Noah ends up becoming friends with Kevin and has entered the same school as a senior that Claire teaches at and ironically ends up in her class. He’s good looking, buff, helpful and an all-around boy scout, at first that is until a mistake is made one night and Claire sleeps with him. I must say it is one very revealing and erotic moment between the two on the big screen. The next morning Claire realizes the mistake that she made sleeping with her neighbor, her student, a boy not quite a man. In addition she still has feelings for Garett and worries about what her son, best friend Vice Principal Vicky Lansing (Kristen Chenoweth) would think of her and her actions.

At school Kevin already has his issues with being asthmatic and bullied by Jason Zimmer (Adam Hicks) and his gang of groupies. Well eventually everyone has their run in with Noah and overall none of them are favorable to say the least. When Claire tries her best to end the so called relationship or should I say obsession Noah has with her everything gets worse which eventually involves her family, friends and her job. Yet when Noah takes issues further Claire finds out he had a special video and she and Vicky do everything possible to retrieve it, all which leads to some very disturbing realizations about Noah. In the end, one should know to pay attention to the red flags and if you can’t trust the person in the beginning you probably never will be able to and hopefully your boy next door doesn’t turn out to be Noah. If so time to build an ark and sail away.

Overall the film is pretty good, for the most part the direction is well done and the writing sufficient based on the fact that the story is cliché and predictable. A good score with some decent character development helps to keep the audience interested. Albeit the acting is not even close to Oscar worthy yet Lopez does well keeping the story interesting as our heroin leading lady. Guzman seems to steal the moments he is on the screen whether in or out of clothes. Nelson shines as the kid of separated parents and it’s nice to see Corbett back on the big screen since we don’t see much of him lately. Chenoweth does well with her dramatic side yet tends to mix in her comedic moments but it’s not until the end does she really come across to the audience making us look at her abilities to command the screen. Overall a good supporting cast helps to move the story forward but not enough so to give this film more than 2 out of 4 paws by Jon Patch.

More in this category: « The Wedding Ringer Black or White »
back to top