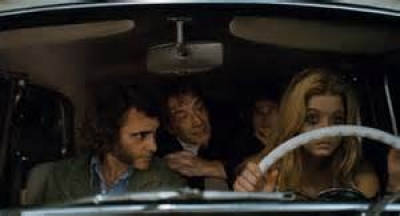 Private Investigator slash ‘hippie’ Larry “Doc” Sportello (Joaquin Phoenix) is living in Los Angeles, California during the 1970’s. Crime, sex, drugs and living free of course were the times. Doc’s old girlfriend Shasta Fay Hepworth (Katherine Waterston) appears at his apartment with an idea to kidnap her current boyfriend, Michael Z. Wolfman (Eric Roberts) with the help of his current wife Sloane (Serena Scott Thomas) and her boyfriend, all for his money. But things don’t go as planned and when real estate mogul, Wolfman and Shasta go missing Doc is on the trail to find their whereabouts but not without Lt. Det. Christian F. “Bigfoot” Bjornsen (Josh Brolin) following his every move, for many reasons other than solving the case.

The road to solve the mystery involves a vast array of characters, moments of sexual encounters, dental calamities, golden fangs, the FBI, the DEA, Ouija, and even a heckler moment with Nixon. Yet when it comes down to a strange moment with Adrian Prussia (Peter McRobbie) and his Nazi henchmen matters for Doc personally take a wicked turn ending in a very strange switch and bait night with Bigfoot leading to a sea of memory and forgetfulness. The final questions, does this mean we’re back together? I’ll let you figure that out along with the true meaning behind this very long and confusing story.

According to the dictionary, ‘Inherent vice’ is a hidden defect in a good or property which is causes or contributes to its deterioration, damage, or wastage. This characteristics or defects of inherent nature make the item an unacceptable risk to a carrier or insurer. In case the characteristic or defect is not visible, or in cases where the carrier or the insurer has not been warned of it, neither of them may be liable for any claim arising solely out of the inherent vice. Examples of inherent vice include spontaneous combustion, rust etc. This is the dictionary meaning of the title of this film and it makes more sense than any part of the film itself did!

The director does a nice job with what he is known for creating past and present but the film plays better as short versions rather than a full out film. At times its forgetful, confusing, boring and just plain odd but it does have its shining moments as for the acting, the cast of characters including so many cameos, the music and some of the writing at least the moments that make sense. I’d like to say I liked the film overall but I’d be either high or psychotic and actually I’m neither, at least I don’t think I am! Yet after watching this film I may be and don’t realize it!

Phoenix is truly mesmerizing and is almost too convincing making him perfect for this role. Waterston is a bit stiff and mumbling with her lines making it difficult to follow her character. Brolin is always a pleasure to watch on screen and again he does not disappoint. Roberts has a short role, actually a few mumbles here and there. There are many cameos in the film almost to many to mention but in my opinion even as great as many of these actors are whether involved in long or short scenes on screen this film is one big mess as a whole yet it does have its overall moments that make it worthy of a rental at home especially if you’re smoking at the time of viewing. Albeit, I give this film one and half paws out of four, mainly for some great acting and several individual scenes amongst the actors. Written and a bit confused by Jon Patch.

More in this category: « The Gambler Selma »
back to top

We have 549 guests and no members online