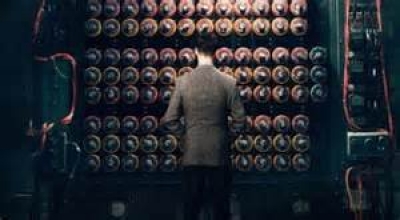 With the Nazi’s winning the war it looked like there was only one way to win, breaking Enigma. But how does one break a seemingly impossible code?

“Maybe the only way to beat a machine is with another machine.” This was Alan Turing’s (Benedict Cumberbatch) thought when he joined a highly secret operation to take down Enigma. Turing and his highly trained team of code breakers, including Joan Clarke (Keira Knightley) race against time to stop the Germans from destroying the world.

Enigma is the coded system that Germany used during World War II to communicate their attacks. With billions of possibilities and changing them every day the task to crack the code seemed highly unlikely. Alan Turing, a brilliant mathematician and logician, plans to build what is now called the computer. Along with Hugh Alexander (Matthew Goode), John Cairncross (Allen Leech), and Peter Hilton (Matthew Beard) they get to work at cracking the most impossible code known to mankind.

Butting heads with their brilliance and Alan’s inability to work in a team, they somehow manage to pull together and put all of their brains to good use. I really enjoyed everything about The Imitation Game. The acting from everyone was absolutely amazing. Cumberbatch and Knightley do a phenomenal job together, bringing a different kind of spark to the screen. I was very captivated with every scene; I definitely give it three paws!  Lexi Lapp

More in this category: « Unbroken Into the Woods »
back to top

We have 998 guests and no members online