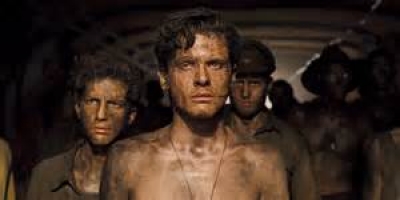 Forgive the sinners, love thy enemy! Young Louis Zamperini (C.J. Valleroy) was a troubled kid, drinking, smoking, fighting, and always getting into trouble until one day it was discovered mainly by his brother Pete (John D’Leo) that this young man could run. Louis ran in High School known as the Torrance Tornado and was later primed for the Olympics at which he competed and won. War was going on in the world and the United States was in battle with Japan, not even an Olympic runner now an older Louis (Jack O’Connell) could not be at risk of dying in battle. A moment of pain is worth a life time of glory.

Serving on a military fighting plane which eventually crashes in the ocean, he and two other men survive, Russell Allen ‘Phil’ Phillips (Domhnall Gleeson) and Francis ‘Mac’ McNamara (Finn Wittrock). Sharks, boiling hot sun, cold nights, storms, no food other than what they can kill in the waters around them, they pray to God asking for his help. On day 45 Louis opens his eyes and whispers in a dying voice to Phil that he has good news and bad news. The good news they have been rescued, the bad news, by the Japanese military.

Torture and torment follow the two remaining men until one day they are split up and sent to detention camps as enemies of Japan. At this point in the story the focus is mainly on Louis, the men he gets to know at the prison camp and the one Japanese leader Mutsushiro ‘The Bird’ Watanabe (Takamasa Ishihara) that has taken hatred to Louis along with a bamboo stick to his face and body on a regular basis. Almost beaten to death at times Louis stayed strong and eventually ‘The Bird’ was transferred to another camp making Louis one very happy prisoner. His happiness once again turned to pain when his current camp was evacuated and sent north to a coal workers prison camp under even worse conditions and as for Louis he soon learns that hell has once again opened its gates on him personally, hearing those ruthless words “don’t look at me”. Yet after the death of Roosevelt the men eventually learn that the war is over and for the survivors left as prisoners freedom is finally theirs. Years later most men learn that it is not worth revenge but rather the act of forgiveness in order to move forward and at the age of 80 Louis was back in Japan still running with no ‘Bird’ in sight.

I thought Jolie did a nice job directing this film as a biographical dramatic true war story. The writing was well done overall but I just thought at times that the story tended to drag slightly. The wardrobes where appropriate making you feel like you were there right down to the senseless battle of war of which had some nice special effects yet more so not having to rely on too many of them to make a well done film that relies on more content then effects.

I thought for the most part the casting was well done. Valleroy and D’Leo I could have watched more scenes with them and the antics of a young boy trying to find direction in his life. Wittrock and Gleeson were a compliment to O’Connell who by the way does a nice job as the lead but at times he made me want just a bit more. Several of the actors at camp were very well chosen and truly help along with tons of extras to make this film worth seeing if not in a theater near you then at least on DVD. Many say it is war that helps to fuel our economy which tends to bounce back and forth from good to bad but is it truly worth the lives of our sons and daughters who work hard for our freedom. Written and intelligently appreciated with two and half paws out of four by Jon Patch.

More in this category: « The Hobbit: The Battle of the Five Armies The Imitation Game »
back to top

We have 525 guests and no members online