Dumb and Dumber To Featured 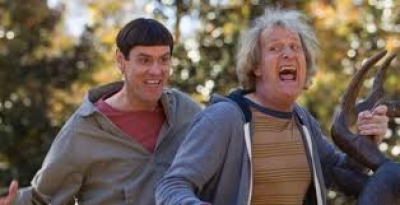 Harry Dunne (Jeff Daniels) has spent two decades visiting his best friend Lloyd Christmas (Jim Carrey) in the hospital until one day Lloyd speaks and gets released. Upon learning that Harry is in need of a kidney transplant the two men are out on a journey for help. First stop his adoptive parents, well no luck there since they’re not only not his biological parents but they’re also not white meaning you think Harry would have had a clue before now.

Stopping at Harry’s place Lloyd discovers that Harry got a new roommate along with a cat named Butthole and not to soon after a bout with some rock candy Butthole is swinging from the chandelier only later to wreak horror on their neighbor Billy’s (Brady Bluhm) many birds. Next stop Felcher and Felcher Funeral Homes where the boys are in pursuit of an old girlfriend Fraida Felcher (Kathleen Turner) who they found out was the mother of Harry’s love child, Penny (Rachel Melvin), who is now a grown up girl living with her adoptive parents Adele (Laurie Holden) and Dr. Pinchelow (Steve Tom).

Fraida wants to meet her daughter and Harry needs a kidney and since it seems to be the obvious thing to do the guys are back on the road trip from Providence to El Paso where this journey leads to some pretty funny hysterics throughout the movie. Yet beforehand they stop to visit Dr. Chandelier where they soon discover that Penny is at the KEN Conference speaking on behalf of her father’s work as a scientist. Since she forgot a package that Dr. Pinchelow asked her to bring to the conference to present to an associate, Harry, Lloyd and Travis (Rob Riggle) the Pinchelow grounds keeper are off to seek Penny, all for ulterior motives, a kidney, fatherhood and a present possibly worth billions.

Matters do not turn out as expected, we learn of some disturbing news in a three way journey to save the day by finding Penny as soon as possible. We end up learning the truth about Oyster Swallow Cove, Penny’s biological parents, the meaning of Gotcha and the fact that dogs truly love peanut butter.

I hardly remember the first film with all the same characters but I do remember it was quite good. This sequel not as much! The direction loses its way towards the end of the film and probably so due to some bad writing. There are some very funny lines in the film but they tend to get lost in the story or mis-represented in the moment by the characters. Overall it’s got its moments worth seeing but I would not be disturbed if I waited for the DVD to hit in the very near future.

Carrey is funny as usual but in this sequel he seems to try too hard whereas Daniels I thought doesn’t seem to try hard enough. Riggle plays a duel role and seems for the most part he’s ready to soar. Holden is fine as is Tom yet Turner is absolutely delightful as is Melvin yet I tended to like the scenes with animals a bit more than any other moment. Written with one and half paws out of four I’m Jon Patch. Gotcha!

More in this category: « Beyond the Lights The Theory of Everything »
back to top