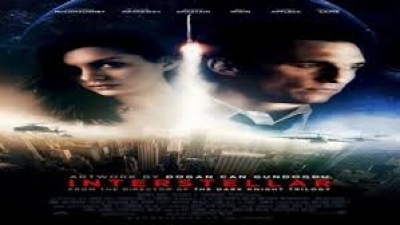 Our planet, Earth, is in trouble, dust storms have wiped out many of our resources and the most valuable profession is farming. Cooper (Matthew McConaughey) is a corn farmer with his family, Donald (John Lithgow) his father-in-law, Murph (Machenzie Foy) his daughter and Tom (Timothee Chalamet) his son. Cooper would like his son to grow up, go to college to study engineering but since the world needs food more than technology his path in the corn fields is laid out for years, as many as may be left on Earth. Young Murph has discovered what she thinks is a ghost in her bedroom but when she and her father discover it has something to do with gravity a search for answers ensue, leading them to a hidden secret in the middle of nowhere.

Cooper and his daughter end up meeting Amelia (Anne Hathaway) and TARS (voice of Bill Irwin) along with Professor Brand (Michael Caine), Doyle (Wes Bentley), Romilly (David Gyasi) amongst other NASA employees all working to find a way to save the Earth through the Lazarus program. Many think mankind is not meant to save the world but rather leave it and Professor Brand has asked Cooper who happened to be an ex NASA flight pilot and one of the best by the way as well. There is a worm hole in space that could lead a crew of astronauts aboard the Lazarus Endurance into another Galaxy. In turn, maybe finding some missing lost in space astronauts that are on separate planets with data outlining the possibility of building blocks to a new colony of life that will be the answers needed to save our planet. The crew discovers that Miller’s planet is filled with water, Mann’s is frozen and as for Edmund’s who by the way Amelia has her reasons for wanting to rescue is one of two choices in the end, save themselves due to fuel issues or head to Edmund’s planet in search of answers. Throughout their journey lives are lost, dreams are shattered yet love still prevails even when an hour in space on the other side of a black hole represents seven years on Earth. If the Endurance crew doesn’t find an answer soon it could mean the loss of mankind forever.

In the end, secrets are spoken, lies are exposed and the meaning behind the word ‘stay’ is revealed by an older Murph (Jessica Chastain). Man has always found a way and when Cooper unravels the meaning behind a higher being known as “they” all the pieces to the puzzle finally fit. Dot, dot, dot eventually leads to 124 years later as one man stands alone, out to find Amelia and a new home from a world Cooper had one day envisioned.

There is a lot that goes on in this film; too many moments to discuss that would probably ruin some plot twists so I will let them be unspoken or written in this case. Great direction with most of the photography and special effects looking quite good, a nice score although a bit overwhelming at times accompanies many of the dramatic moments in the story. The writing is well done but at times seems to wonder making the story a bit difficult to follow although for the most part the loose ties do come together in the end. Just don’t look away or you may really get lost in space.

McConaughey has really found himself and it surely shows in this film as well. Hathaway is diverse and proves it again with this role. Chastain is spot on and being a big fan of hers I can only say she is next to perfect once again. Foy does a nice job as the young Murph along with Chalamet who plays her young brother later in the story as he becomes older it is Casey Affleck that makes his character shine in a stubborn way. Caine, Damon, Grace and Lithgow are all nice supporting roles that truly do nothing short of superb. Overall a very long film that moves well yet could be a bit confusing if you don’t pay close attention yet in the end I have to say I liked the film but did not absolutely love all of it thanks mainly to its length in time which was causing my gravity to falter slightly. Yet I would recommend this film for the audience to see it on the big screen rather than DVD or Blu Ray with three paws out of four I’m Jon Patch.

More in this category: « Before I Go To Sleep Big Hero 6 »
back to top