Before I Go To Sleep Featured 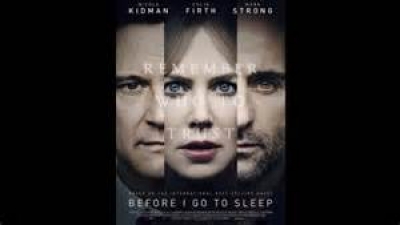 Before I Go to Sleep movie review by Lexi Lapp

When 40 year old Christine (Nicole Kidman) wakes up in the morning, she is greeted by a strange man in

a strange bed in a strange house. She quietly slips out of bed and heads to the bathroom. She closes the

door and when she turns around she sees pictures all over the wall. Pictures of her and a life she can’t

remember. When she opens the door the man who had been lying beside her is sitting at the end of the

bed. He tells her his name is Ben (Colin Firth) and that they have been married for 14 years.

Christine had been in an accident 10 years earlier. She had extreme injuries to her head and was left for

dead, now she can only store memories up to one day. She wakes up every day believing she is still in

(Mark Strong) is on the other line. He informs Christine that he has been helping her on her memory so

they can find out who did this to her. Everyday Christine records on a camera, which she keeps hidden

in her closet, and watches it every morning to help her remember what happened the previous day.

As the days go on, Christine gets glimpse of memory, whether in a dream or just by seeing or hearing

It’s a difficult journey to recovery but slowly and surly Christine remembers. I don’t want to give too

much away, although if you read the book you already know the ending. Nicole Kidman did a wonderful

job and her acting really made you want to watch the movie, seeing as how repetitive it got. The acting

of the cast was great given the writing for the overall movie. It was definitely predictable, however there

was a slight twist in the end. It wasn’t my favorite movie of the year, but it wasn’t all that bad either. I

was pretty interested the whole time so I give it two paws.

More in this category: « Maleficent Interstellar »
back to top

We have 741 guests and no members online