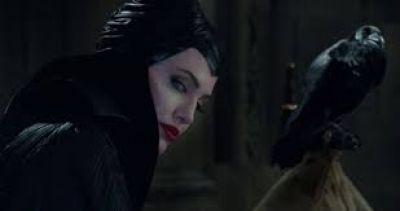 There are two kingdoms, one led by a greedy and evil King Henry (Kenneth Cranham) and the other has no King or Queen but is a mystical land filled with exotic creatures and plants watched over by a young Fairy girl named Maleficent (Isobelle Molloy). Her land is not fond of humans but when she one day befriends a boy named Stefan (Michael Higgins) her life begins to change. Years later now a teenager, Maleficent (Ella Purnell) has taken even a bigger liking to Stefan (Jackson Bews) but he dreams of one day being King and disappears growing up in the castle walls.

Years later, Maleficent (Angelina Jolie) is still watching over her land and Stefan (Sharlto Copley) has not been seen in years. King Henry has decided to rage a war on the moors but after Maleficent fights back with her army Henry is left defeated with revenge in his heart. He states whoever can kill Maleficent that he would crown him King so Stefan decides to take advantage of an old friendship. One problem he cannot kill her yet still he takes away from her her one true love and the strength to preform her will on the land she so loves. Gone into darkness she and her land are in pain yet she saves a large bird from peril and turns it into her servant as she continually turns Diaval (Sam Riley) into everything imaginable from a human to a bird to a wolf, just to name a few.

Meanwhile Stefan who has become King along with his wife Princess Leila (Hannah New) has given birth to a daughter. Maleficent has heard the news and decides to attend the celebration of the birth of Aurora but she does not bring gifts like the other fairies, Flittle (Lesley Manville), Knotgrass (Imelda Staunton) and Thistletwit (Juno Tample) rather ends up casting a spell on her exclaiming on the eve of her sixteen birthday she will prick her finger on a needle causing her to fall into an endless sleep and only able to be awoken by the kiss of a true love. Thereafter King Stefan decides to have Aurora live away from the castle in a cabin in the woods with the Fairies in hopes of saving her life. She may return home after her sixteenth birthday hopefully safe from harm. Once Aurora (Elle Fanning) begins to grow Maleficent along with Diaval watch over her while all along beginning to love her, not the best scenario for a scorned woman who was trying to seek revenge on the young girl’s father.

Unable to turn back time, Aurora as she turns sixteen has drifted into a sleep and Maleficent has dragged an acquaintance Prince Phillip (Brenton Thwaites) to her side in hopes that his kiss would make a difference. In the end the truth has come out and true love prevailed. In the end, it was over, the wall of thorns are no longer and all is bright again due to a young girl with a big heart along with her Fairy Godmother who happens to be a hero and villain, that has united two lands once divided together as one.

I loved this film, grant it I had high expectation of which it did not quite reach but it was very close. The use of 3D, on IMAX, a great score and some phenomenal special effects make this film a must see if you haven’t already seen it in the theater. Jolie is spectacular playing both good and evil. Fanning is a perfect cast along with Riley who doesn’t have a huge speaking part but acts well aside Jolie. Manville, Staunton and Temple perform well as the Fairies but I just happened to wish for a bit more from them. I am not aware of Copley but he really took the reins as King and one of the main characters of the film. Overall an exceptional cast and a magnificent film albeit a bit dark and scary for the kids maybe with a few holes along the way but that aside this film is sure to delight. Written and enjoyed with three paws out of four by Jon Patch.

More in this category: « Nightcrawler Before I Go To Sleep »
back to top