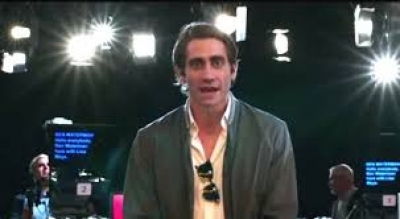 Louis Bloom (Jake Gyllenhaal) is a thief that would rob just about any piece of junk or valuable for a dime. No job but rather a sharp mind almost like that of a serial killer he strives for work but in all the wrong places. It’s not until he witnesses a camera crew filming a car accident on the side of the highway does he realize what direction he wants to move in. A stolen bike later and a trip to the local pawn shop Louis is able to make some money buy a camcorder and police radar giving him the opportunity to make something of himself, a freelance photographer.

Not respected by police or other camera crews like the one run by Joe Loder (Bill Paxton) Louis does his best to make the shot before anyone else at any circumstance. When he works his way into KWLA News 6 meeting News Director Nina Romina (Rene Russo) and Frank Kruse (Kevin Rahm) with first time footage of a shooting victim he wins his way into Nina’s mind. Louis at first comes across strange but as he progresses as a photographer now with the help of a hired assistant Rick (Rick Garcia) Louis seems to become a bit more normal but not soon thereafter he relapses back into a crazy person, think sociopath! It even gets to the point that he manipulates Nina not only on the job but in the bed as well.

It’s not until he overcomes his competition in all the wrong, illegal ways does he overcome his obstacles. No one likes to be lied too but as Louis begins to feel a sense of mistrust he begins to lose his control with all intentions of stopping anyone, no matter whom, that gets in his way of creating his own business, Video Production News, VPN. Some innocent people may become collateral damage yet some may become intentional damage either way Louis is determined to expand his horizons in the news world. His new motto, “I would never ask you to do something I wouldn’t do myself”. I wonder if that includes lie, beg, somewhat borrow, steal and cheat all for self-satisfaction and potential personal gain which of course seems to lead to death and destruction in his every move.

Gyllenhaal is absolutely phenomenal in this role. At first due to his appearance he had lost weight in the face making him seem a bit unrecognizable but overall he really embodies this character so much so that he draws you in to his soul as a man once loved but no more. Bill Paxton has a supporting role but seems to carry it well as does Russo as the boss getting a new happy ending from Louis.

I enjoyed the direction but in the end I almost feel like the story got dragged out, making it a bit shorter may have made it a bit more together. The writing is well done but maybe if they filled in some of the dead time with more Gyllenhaal it would have made a world of difference. A great score with some superb shots of Los Angeles help to make this high on acting but so so on overall direction and writing worth seeing at the theater. Written and enjoyed more so for Gyllenhaal than any other factor with two and half paws out of four by Jon Patch.

More in this category: « John Wick Maleficent »
back to top

We have 544 guests and no members online