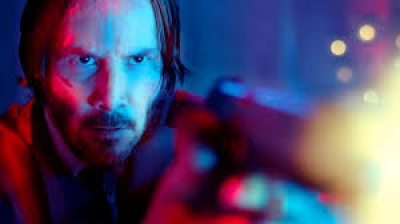 John Wick (Keanu Reeves) is a man who got out of the hit man game to take care of his dying wife. Leading up to her death, she arranges for a puppy to be sent to her husband on the day of her funeral. Two days after her death, John and the puppy are out filling up his ’69 mustang when he is approached by a young man asking how much for the car. John refuses the offer. That evening John is awoken by the pup who runs downstairs barking. John follows, where he is greeted with a metal pipe held by one of the young man’s associates. When John full awakes his house is destroyed, his car is gone, and the final gift from his wife lies beside him in a pool of blood. Enraged John contacts some of his old colleagues to try and find out who these tyrants are who have taken everything from him. The young man is Iosef Tarasov (Alfie Allen), the son of his old boss Viggo Tarasov (Michael Nyqvist).

When Viggo finds out what is son has done he gives him a little lesson on who he just messed with; calling John “The Boogieman”. Iosef tells his father he’s not afraid of any boogieman and laughs at even the thought of it. Viggo then tells him that they called him this because “He is the man you send to kill the “Boogieman”. Knowing now what his son has done, Viggo put out a contract for 2 million dollars for anyone who can kill John Wick. Now it is a battle between temporarily out-of-retirement John Wick and the man he used to kill for, son.

John Wick was everything you want in an action movie. There were no slow moments, making you focused on the movie from start to finish. If you don’t like blood don’t see this movie. It is extremely graphic with all the fight scenes, lots of bloodshed. The casting was absolutely fantastic. Everyone did a phenomenal job with the role they were cast really making for an awesome movie. I wasn’t crazy about some of the cinematography but other than that it was one of the best action movies I’ve ever seen. I give it three paws!

More in this category: « Ouija Nightcrawler »
back to top

We have 469 guests and no members online