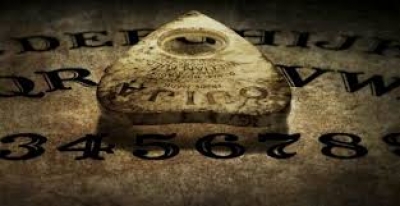 Never play alone, never play in a graveyard and always say goodbye. Or else! Two young girls Laine (Afra Sophia Tully) and Debbie (Claire Beale) are playing with an Ouija board one night in the upstairs bedroom. Years later Laine Morris (Olivia Cooke) is trying to get her best friend Debbie Galardi (Shelley Hennig) to come to a high school game but much to Laine’s disapproval Debbie stays home that night. The next morning Debbie is dead!

Mrs. G (Robyn Lively) has a gathering at her home to celebrate the life of Debbie and all of her closest friends and family are in attendance. Laine and her troubled sister Sarah (Ana Coto), Trevor (Daren Kagasoff) Laine’s boyfriend, Isabelle (Bianca A. Santos) and Pete (Douglas Smith) Debbie’s boyfriend. It’s not until later in the evening when Laine finds the Ouija board in Debbie’s closet does strange things start to occur. Laine and her friends decide to ask the board questions in hopes of answers about Debbie’s death, the board answers with these first words, “Hi Friend”. Thinking it’s their friend Debbie, they forget that the worst thing one can do is seek answers from the dead. Soon thereafter the question, “Are you here” well if objects move and shadows look bigger and closer than they would in a side view mirror, I’d say someone is there. Problem is it may not be the someone you seek! In this case in an attempt to contact their friend it is not quite what Laine and her best friends thought they would encounter.

It appears that Debbie at one time woke up whatever it was that was dead in that house and when Laine is made aware of the situation she seeks answers on how to stop the evil that threatens her and her friends. In the end, a voice is heard, a family battles to the death and the only way to stop the evil is to sever the connection between board and body. But, does it work? Take a look through the glass eye piece of the board game and you’ll find out.

The film reminded me of old school films like “Halloween” or “Nightmare on Elm Street” yet even closer to “Final Destination”. All these films went on to make money and I’m sure this one with such a low budget will make a nice box office tally. Grant it the direction is pretty well done, the writing has holes in it and the music is a perfect match to this horror film but through it all being a horror fan I’d recommend seeing it for a good scream. My friend April was clung on to my arm cutting off the blood and the women behind me in the theater kept gasping, “don’t go in there, oh no I told her not to go in there”. These are some good indications that although this film will not win any awards the horror aspect of it will surely cause people to see it on the big screen. I just want to know, where were the cops, parents or the Catholic Church. Yet overall I absolutely enjoyed this cliché horror film that truly leaves the door open for Ouija 2.

Cooke does a nice job of carrying this story, adding a good sense of emotions to her character. Hennig actually works well within her life and death situations. Coto plays the scary sister to Laine, who constantly gets in trouble. Kagasoff was a good addition to the crew as Laine's boyfriend yet Smith I can’t quite say the same about as Debbie’s boyfriend, a case that can be argued slightly by his lines and direction. Albeit a slightly low budget horror film that is sure to perform well thanks to the bewitching time of the year. Written with two paws out of four by Jon Patch.

More in this category: « St. Vincent John Wick »
back to top

We have 565 guests and no members online