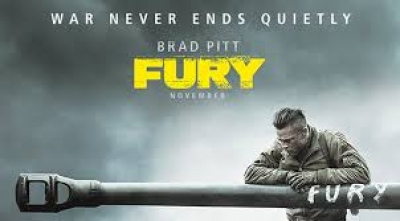 It’s World War II, April 1945; there are considerable American losses of our troops including the brave men that operate our tanks. Don Collier otherwise known to his comrades as “Wardaddy” is stranded in the battlefields with a few of his men, Boyd ‘Bible’ Swan (Shia LaBeouf), Trini ‘Gordo’ Garcia (Michael Pena) and Grady ‘Coon-Ass’ Travis (Jon Bernthal). A Nazi soldier rides on to the field, one man, one horse, one war and one enemy. Moments later the horse leaves alone.

As the men are able to make their way back to a base camp they are soon given a fifth member of their tank, an assistant driver, Norman Ellison (Logan Lerman), a kid that has never seen war, was mostly meant for office work being able to type sixty words a minute and is not mentally ready for what he is about to experience. Wardaddy can be tough, and surely needs to be, regarding Norman but somehow someway this kid needs a quick lesson in survival both physically but mainly mentally. It’s not long after the men take to conquering city to city that Norman gets initiated into shooting his first Nazi, a task he must learn or else it could cost his life as well as others.

Does Jesus love Hitler? There were several religious conversations between the men during their time at war. It really makes you question why God would allow a man such as Hitler to live within the presence of good as he spread his wrath of evil throughout Germany. Innocent people killed, children fighting in the battle fields, homes destroyed and fear running rampant throughout cities in Germany. Ideals are peaceful, history is violent. Scars are created on the outside of soldiers as well as in the inside of their souls.

There ae moments of good will and kindness in the story especially when Wardaddy and Norman meet up with Irma (Anamaria Marinca) and her cousin Emma (Alicia von Rittberg) but as quickly as those moments are shared they are taken away as well. Yet it is not until the men meet their beast that strands them in the crossroads of a German valley, leaving five men to fight the battle of their lives leaving one hero to emerge from the smoke and gun fire of war.

I thought this film was directed and written superbly. The story although over two hours on the screen it runs well and keeps you intrigued with the relationships between the men in close quarters of a tank and the mental anguish that war plays on their minds. There are some phenomenal special effects, a great score, lots of blood and destruction and lives’s being extinguished in a blink of an eye but it is the struggle within Norman that really peaks my interest. Wardrobe, sound, attention to detail all are wonderfully presented that helps make this film worth seeing on the big screen.

Pitt is spectacular as the Sergeant leading his men but it is the relationship between he and Lerman on screen that really stands out. This film is sure to propel the career of Lerman since he is much of the focus in the story along with Pitt. LaBeouf looks rough in this film but of course plays the wingman to Pitt’s character very well. Pena adds a little comic relief at times and Berthal brings on the intensity. All the men complement each other which helps the audience to get invested and in turn make this film worth seeing in the theater. As for supporting roles, extras and just overall props and animals this film will leave you interested in seeing more yet asking the question, What is the point of war? Written with three paws out of four by Jon Patch.

More in this category: « Men, Women & Children St. Vincent »
back to top

We have 514 guests and no members online