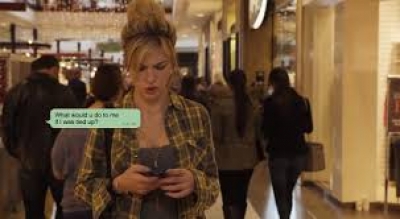 The film revolves around the lives of several families that are all interconnected in one way or another in this socially technological world we live in known as the pale blue dot. Don Truby (Adam Sandler) is an average father and husband, he goes to work, comes home, masturbates to porn on his son Chris’s (Travis Tope) computer which one day leads to a hook up with Angelique (Shane Lynch). Chris is dating Hannah Clint (Olivia Crocicchia) a cheerleader, want to be famous actress, at his high school. Her mother Donna (Judy Greer) is a huge supporter of her daughter’s life goals so much so that she created a web site of Hannah that may have just gone a bit too far. Chris’s mother Helen (Rosemarie DeWitt) is the typical housewife, bored with work and home so one day decides to post her picture, no face of course, on a local hook up site. Need I say more, once on a dating site usually leads to more than once caught between the sheets and don’t let anyone fool you that your partner is just chatting or looking for friends.

Patricia Beltmeyer (Jennifer Garner) is a bit of a control freak when it comes to her daughter Brandy (Kaitlyn Dever) monitoring her every computer, cell phone, and GPS movement, so much so that she deletes computer programs, text and phone calls from Brandy’s life. Ray (Jason Douglas), her father seems to try to keep his wife Patricia in check but reality wise Patricia is far gone over the top in trying to protect her daughter from the social media. Brandy is secretly dating a recent high school ex-football player Tim Mooney (Ansel Elgort) that is being taunted socially everyday as a traitor or fag because he dropped from the team for personal reasons. Reasons that one day makes him and his father Kent (Dean Norris) question video games versus football, does he matter and will anyone in the universe miss him if he were gone? Kent recently left by his wife has taken a liking for Donna Clint; he has always wondered what his ex-wife was up to until now!

Allison Doss (Elena Kampouris) friends with Hannah, at least Hannah thinks so but if you read Allison’s text messages to Brooke Benton (Katherine C. Hughes) one might second guess that friendship at all. Allison has a crush on football jock Brandon Lender (Will Peltz) but he only looks at her due to her recent weight loss which happens to be a bit out of control. Allison’s father (J.K. Simmons) and her mother (Tina Parker) are both huge supporters of their daughter all except for the fact that she hardly eats. In such a vast universe it is amazing just how small this home we’ve ever known as earth is to live in with texting, sexting, internet porn, hook up sites and so much more. All of these elements have changed the world we live in making it to accessible for bad behavior leading to self-destruction in a once beautiful and socially in the physical sense active world that no longer exists.

Even though the film plays a bit long I really enjoyed this story about the way all this social media is affecting our lives and not so much all in a positive manner. Everyone makes mistakes but it is the ones that keep returning to the scene of the crime not the victim but rather the criminal that should make one question their future. I did like that the film’s narrator (voice of Emma Thompson) helped to shed some light on some of the character development throughout the film. It is superbly directed and brilliantly written making sure that most people of this day and age can reflect on the dialogue and relate to several of the characters. There are sexual situations, bad language and just very real situations in this story that all come together to truly bring the audience to take a look in the mirror at themselves.

Sandler takes on a much more dramatic role in this film and truly hits a home run, beard and all. DeWitt is a perfect match to Sandler and Tope the perfect son. Garner is so good in this role that she really brings out some scary traits that remind me of the mother in the horror film “Carrie” with Dever being the perfect yet distraught daughter. Greer is obsessed almost like a pageant girl’s mother and Crocicchia is truly a great team player as her daughter. Norris is a likable character that is until he makes a mistake in the end causing the audience to judge his decisions that he makes against Elgort’s role as his son. Kampouris is straight out believable and Peltz although not having a big speaking part acts the role of a player well. Overall a wonderful cast that all play well together on the screen making this very realistic depiction of life on earth as we currently know it worth seeing soon. Written and appreciated with three paws out of four by Jon Patch.

More in this category: « The Best of Me Fury »
back to top

We have 561 guests and no members online