The Best of Me Featured 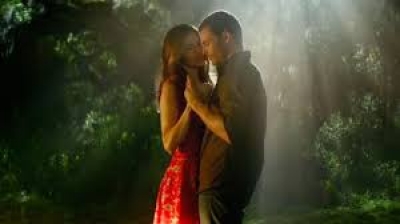 The film has a series of flashbacks that tells the story of Amanda (Michelle Monaghan) and Dawson (James Marsden) and the love that was forever found yet lost then discovered. Years later James is working on an oil rig until an explosion sends him one hundred feet into the depths of the cold icy water lost for four hours. Doctors are mystified as to why he is still alive but during that time he had a vision of Amanda from twenty one years ago. Amanda now unhappily married to Frank (Sebastian Arcelus) with one child Jared (Ian Nelson). One day they both get a call from Morgan Dupree (Clarke Peters) that Tuck Hostetler (Gerald McRaney) has passed away. After twenty one years of separation Amanda and Dawson meet in Vandemere, the estate that Tuck owned.

Flashback to Autumn 1992, young Dawson (Luke Bracey) meets young Amanda (Liana Liberato) over a broken down car owned by his best friend Bobby’s (Robby Rasmussen) girlfriend April (Caroline Hebert). Dawson is the son of a low life backwoods criminal who beats him on a regular basis for no reasons at all. Amanda is the daughter of a wealthy Louisiana family. The love the two feel for each other is real and for some unrealistic due to their diverse backgrounds but for Dawson and Amanda that was never a reason to not be together. When Dawson’s father beats him again he leaves and ends up on a rainy night taking shelter in Tuck’s garage yet in the morning when he is found asleep the two men forge a friendship that grows stronger with each passing day even after a battle with Dawson’s family. Amanda has always been by Dawson’s side throughout the first kiss, the first rose from Tuck’s garden and the first time they make love. It is a bond that seems will live on forever.

When Tuck died he left letters for Dawson and Amanda that were not to be opened until they are alone. Each have lived through tragedy and pain throughout the years but as they both spend time packing up Tuck’s estate they learn that no matter how many years have passed by they never stopped loving each other. The scars they have both endured whether physical or emotional no longer hurt but the love they had for each other throughout all those years has never gone away.

Amanda’s father Harvey Collier (Jon Tenney) loves his daughter very much so much so that he tries to bribe Dawson to leave her. It only makes there bond even stronger. Yet on prom day Dawson’s life and that of Amanda’s takes a turn for the worst when once again Dawson’s family decides to take revenge on Tuck leading up to one bullet fired and many years in jail for the death of an innocent person. Amanda visited every day for a month and every week for a year trying to see Dawson but to no avail.

Dawson always wondered what his purpose was for surviving the oil rig incident yet years later his heart let him know exactly why! His lie apparently did have a destined path and for some second changes can mean the difference between life and death.

This film is wonderfully directed and written with a beautiful score to accompany the gorgeous photography and the moving and touching story line. The flashbacks actually work and make sense adding much depth into the development of the characters. Monaghan and Marsden are both a perfect match and definitely brings this story to life but it is Bracey and Liberato that are the true focus of this film being a slight higher level in the story. Bracey plays the role superbly but as for a young Dawson I did not see him visually as a good depiction physically of Marsden, whereas I can totally see the likeness between Monaghan and Liberato. McRaney is the perfect father image unlike Tenney’s character let alone Dawson’s father in the film. Rasmussen plays a double role and Hebert although in a small role does a nice job. Truly this film is nicely cast and a must see for all the romantics out there but make sure to bring tissues. Written and appreciated with three paws out of four by Jon Patch.

More in this category: « Dracula Untold Men, Women & Children »
back to top

We have 233 guests and no members online