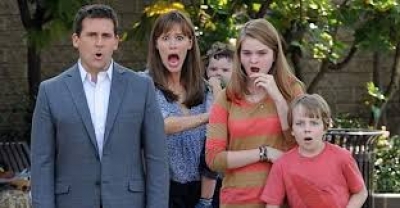 Alexander Cooper (Ed Oxenbould) wakes up to yet another bad day, gum in his hair and this time a party invite to Philip Parker’s (Lincoln Melcher) birthday bash, the same day as Alexander’s. Philip being the cool kid at school is sure to leave Alexander with no attendees or at least very little of them. His family are all having wonderful days and to Alexander they have no clue what it’s like to be him and deal with his issues.

Alexander’s father Ben (Steve Carell) is a fammy, part mom and dad staying home to care for the kids, he is a PHD in engineering with a lucrative experienced background, yet he is having trouble finding work that is until one day the phone rings and he has a chance of working at a video game company as a creator. Kelly Cooper (Jennifer Garner) otherwise known as mom is working for Nina (Megan Mullally) in the publishing world of children’s books and she is up for the Vice President’s position. Anthony Cooper (Dylan Minnette) is dating one of the hottest girls at John Marshall High School, Celia (Bella Thorne) and prom is just around the corner as well as his driver’s test. Emily Cooper (Kerris Dorsey) is the aspiring actress and singer and she has the lead role as Peter Pan in her school production. Then there is Baby Trevor (Elise and Zoey Vargas) who can do no wrong as long as he has his bumblebee pacifier.

Since nothing seems to be going right for Alexander at 12:01 AM the morning of him turning twelve he makes an ice cream wish that his family would actually know a bad day. Well from that morning on, they all had bad days except for Alexander. Dad’s interview disaster, Mom’s VP chances foiled by Dick Van Dyke, Anthony’s drivers test from hell with the instructor Ms. Suggs (Jennifer Coolidge), Emily’s cold and over-dose on medicine before the opening of the play and little Trevor’s loss of the Bumblebee and his attempt to go green. As the whole world falls apart around the Cooper family, Alexander realized to be careful what you wish for in life. They say though that in order to appreciate the good days you have to have bad ones and the Cooper family in a matter of one day has seen it all. Yet in the end, the Coopers realize what is most important, family and as for Alexander he finally gets that special day down under with shrimp on the Barbie.

The direction is very well done in this shorter than normal comedy at only 81 minutes. They could have gone another fifteen minutes or so but overall a good well-done picture. Thanks to some wonderful writing by Lieber this story incorporates many aspects of the theory blood is thicker than water and of course it is! Some nice lessons to be learned along the path of the Cooper family’s adventures as well as some well versed character development. In the end, I truly enjoyed this story, far from too silly yet comical, witty and entertaining by all means.

Carell is looking a bit more meaty these days but of course he is still on top of his game. Garner is a delight and good to see her leading yet another good family role. Oxenbould commands the screen and Minnette, Dorsey and the Vargas twins are all great supports. I love Coolidge and Mullaly and yet even though their roles are small they definitely add a great comical moment to the story. As for Thorne and the rest of the cast they all work well together to make this short but memorable family comedy so well relatable for all ages to see in the theater. Written with three paws out of four by Jon Patch.

More in this category: « The Judge Dracula Untold »
back to top