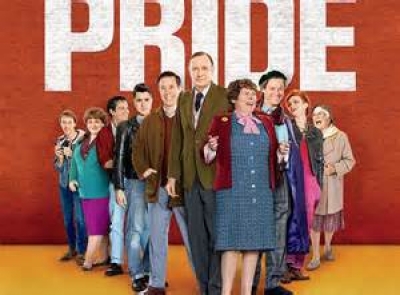 BY LISA & VINCE CENTONZE, DVMs
Pride will no doubt be one of the year’s best feel good movies.

It’s certainly the best we’ve seen.  It is funny and serious, with terrific acting by a relatively unknown cast (at least to Americans), who are unfailingly charismatic.  In addition, the screenplay is excellent and is based on a true story, with lots of pathos that will evoke laughter, tears, and goose-bumps.
The film takes place in Great Britain in 1984.  Margaret Thatcher is in power, and the National Union of Mineworkers is on strike.  A small band of gay and lesbian activists lead by Mark (Ben Schnetzer) decide they want to show support and solidarity for the striking unions, and form a group called “Lesbians and Gays Support the Miners” (LGSM).  They empathize because they, too, have been discriminated against by the government and attacked by the police.  The interaction between these unlikely… ahem… bedfellows make for a series of unusual and sometimes uncomfortable social situations one would expect when the gay Breakfast Club meets How Green Was My Valley.
The problem is that none of the striking unions want to have anything to do with this young group of homosexuals.  One of the members of LGSM, Gethin (Andrew Scott), the owner of a gay bookstore, is from Wales, and remembers the mining industry and culture in his former country.  He finds a Welsh map and randomly contact a small mining town in South Wales.  Dai (Paddy Considine), one of the local union committee members, meets the group in London, and a friendship is formed.  He tells the group, “I’ve never met a homosexual before,” to which Mark responds, “I’ve never met a miner before!”
LGSM takes an outing (no pun intended) to the small mining town of Onllwyn, (which Dr. Vince still can’t pronounce), in the south of Wales with money they have raised to help support the striking miners and their families.  The welcome is initially mixed and hesitant.  Some miners and their families are outright hostile; others are appreciative and grateful for the support.  One of Dr. Lisa’s favorite scenes is when Jonathan, (played by Dominic West, whom you may remember as Theron in 300) a legendary drag queen, shows the Welsh ladies how to dance.  The women clearly are entertained and seduced by this flamboyant, uninhibited gay man and his dancing skills, and one of the undecided young Welsh miners is persuaded to befriend him so he will teach him how to dance and win the hearts of women.
There are a few subplots, which neither confuse nor detract from film.  These include a 16-year estranged relationship between Gethin and his mother, as well as the family tensions experienced by the group’s not-yet-out official photographer, Joe (played by George MacKay, who has a look eerily reminiscent of a young Chrisopher Walken).  And, of course, the film takes place during the early years of AIDS, a still little known threat which hangs over everyone.  Backed up by a solid script and excellent cinematography of the Welsh countryside, Pride is only the third film by director Matthew Warchus.  Yet, Warchus manages a solid film with a basic message about the power of friendship and solidarity, empathy and generosity, and with a few unexpected twists along the way.   Pride goes to show that you certainly can turn coal into a diamond.  Lisa and Vince Centonze give this film 4 paws out of 4.

More in this category: « Gone Girl The Judge »
back to top

We have 348 guests and no members online