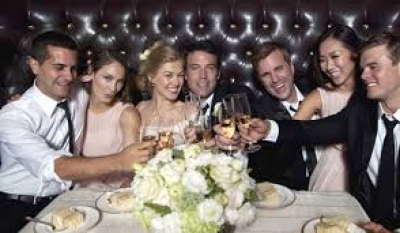 Nick Dunne (Ben Affleck) and Amy Elliott Dunne (Rosamund Pike) are celebrating their fifth wedding anniversary in Carthage, Missouri. When they met years earlier they were the perfect couple, well educated, writers, attractive with a world of dreams and aspirations ahead of them. When the recession hit and they both lost their jobs they left New York to move to Carthage to take care of Nick’s mother suffering from cancer. His relationship with his father who resides at Comfort Hill Assisted Living is nothing less than stressful. Presently the family is far from fans of Amy’s referring to her as a bitch more than family. Yet Nick is not quite all that innocent and holds some very dark secrets not only from Amy but her family and twin sister Margo (Carrie Coon) who runs The Bar downtown, a local pub owned by Nick and Amy.

On July 5th Nick’s life has now forever changed when he returned home one day to find that Amy has disappeared. When Detective Rhonda Boney (Kim Dickens) and Officer Jim Gilpin (Patrick Fugit) show up to investigate the scene they immediately find some clues that lead them on a wild goose chase to find Amy or her body. As days go by and Amy is still missing, the audience learns more about the once happy couple years earlier through a series of flashbacks. The audience is also made aware of her inner thoughts about Amy’s husband as she would write in her journal about how she truly felt about Nick. Marriage is work and every relationship has their issues but in the Dunne family these issues have gotten out of control leading up to the disappearance of Amy. So we the audience are left in wondering if Nick is a murderer or if Amy was abducted, maybe by her high school stalker Desi Collings (Neil Patrick Harris) who still has deep emotional feeling for Amy.

Day three has gone by and Margo learns that Nick is truly like father like son and questions her brother’s innocence, wondering if he could possibly be a sociopath. The crazy neighbor Noelle Hawthorne (Casey Wilson) has even stirred the pot with allegations about Nick Dunne and the stories that Amy had told her about their marriage. Society is up in arms and the media including Ellen Abbott (Missi Pyle), television host, is on full attack that Nick could be guilty of his wife’s murder. Eventually Nick fears for the truth and hires a well-known attorney, Tanner Bolt (Tyler Perry) to represent him in a court of law. As days and weeks go by more truth is revealed and eventually the entire story is exposed leading up to the definition of marriage as Nick would know it, control and pain. For the next eighteen years he will know of nothing but responsibility for his actions and those that were not his doing.

I can’t say too much since I do not want to give away too much of the plot and the twists in this film because there are several and if you read the book then you already know what they are! Fincher does a nice job directing this story bringing in some great twists that make you question the motives. The writing is superb yet I wish the film was about a half hour shorter because two and half hours was way too long even for a well-produced film as this one. Even though I thought the score was appropriate there were a few moments I thought it was more of a distraction than enhancement. I do also question one or two holes in the story with one odd moment that raised an eyebrow about Amy’s haircut. Yet in the end this film is quite intriguing and suspenseful.

Affleck really performs well here and controls the story from start to finish. Let’s hope he can do the same when he becomes the new Batman soon. Pike was a good coupling to Affleck and proves she can truly change her personality at least on the big screen in the drop of a hat. Patrick Harris even though seemed slightly off center he still worked well in his scenes with Pike especially has he reveals more than expected. Perry is once again a character that makes you smile and Wilson will grab your attention as soon as you hear her shriek. Coon is a nice support to Affleck and Dickens does well as a voice of authority. As for the rest of the cast they all attribute an honest performance that makes this film definitely worth seeing as long as you can sit for two and a half hours. Loved the cat by the way! Written and enjoyed with three paws out of four by Jon Patch.

More in this category: « Annabelle Pride »
back to top

We have 571 guests and no members online