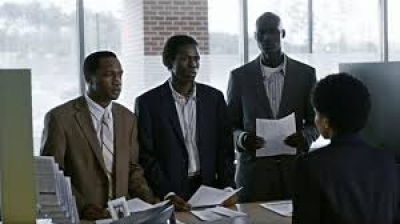 Thirteen years earlier than the present time in Southern Sudan war has ravaged the villagers, parents murdered leaving many children to flee, many homeless, many killed and many left to die from starvation and homelessness. When their village is torched and their parents killed Young Theo (Okwar Jale) his siblings, Mamere (Peterdeng Mongok), Abital (Keji Jale) and Daniel (Kon Akoue Auok), along with friends Jeremiah (Thon Kueth), Paul (Deng Ajuet), Gabriel (David Madingi), Simon (Sibusisu Moyo) and others start their walk to Ethiopia in search of freedom. When they walk over 260 miles they learn of soldiers there and soon make their way 570 miles towards Kenya. Some survive, some die but all of them want to live in hopes of a better future.

When Theo sacrifices himself to soldiers in order to save his family and friends he is taken away and never to be seen again by his young siblings. Finally the children make their way to Kakuma Refugee Camp in Kenya where they find shelter and food but for one life comes to an end. Thirteen years later to present time the children have grown and still live their lives at the refugee camp but they are listed on a government program that if they are picked they can be transported to America for a better life. The men, Mamere (Arnold Oceng), Jeremiah (Ger Duany) and Paul (Emmanuel Jal) find themselves moving to Kansas City where they meet up with their case worker Carrie (Reese Witherspoon) and her boss Jack (Corey Stoll) but for Abital (Kuoth Wiel) she finds herself moving to Boston to live with a family.

The men are now in search of a job in a way too unfamiliar environment. No lions, cheetahs or hyenas but for them cars, McDonalds, people of different color, phones, dogs, an apartment with amenities none of which they understand and ultimately the search for work. Mamere has one occupation in mind, one he has always wanted which is to be a doctor so his goal is to go to school outside of work. Things start to develop for the guys but it’s not until Christmas does their dream really come true and when they learn that Theo may be alive in Kenya, Mamere is determined to right a wrong from so many years ago by making a selfless act. In the end the lost boys of Sudan are found. If you want to go fast go alone but if you want to go far go together, a well-known verse throughout Africa.

They movie is extremely well directed, written, scored and acted with some phenomenal cinematography. It will make you appreciate the life you truly have in America when you see and experience the life these people have in Sudan. The characters are extremely well developed and in such a way that you never lose interest in their life or well-being. As for the cast it was perfect and I cannot say anything bad about anyone actor since they were all spectacular in their roles whether young or old. Witherspoon even though her wardrobe was a bit undesirable her acting skills shine in this role. Yet more than anything the main characters, especially the lost boys from Africa are all superb. Written and appreciated with three paws out of four by Jon Patch.

More in this category: « Left Behind Annabelle »
back to top

We have 218 guests and no members online