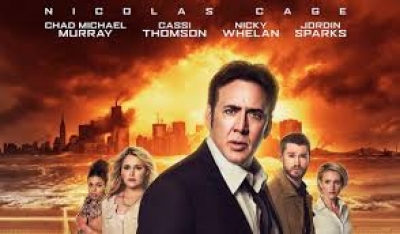 God works in mysterious ways! That is true but the question comes up as of why people die from disease and natural disasters amongst many other reasons but I want to know if there is a God what was he thinking by releasing this film to the big screen. I mean the television version with Kirk Cameron was bad enough, now there is this disaster with Nicholas Cage.

Chloe Steele (Cassi Thomson) has come home to visit her family because it’s her father’s birthday. When she lands at the airport she happens to interrupt a conversation between a religious rights woman and Buck Williams (Chad Michael Murray), a well-known investigative journalist. At that moment there were sparks between the two young adults. Chloe after talking with her mother Irene (Lea Thompson), a woman who has found the bible but still has a failing marriage for several reasons including the fact that her husband Rayford (Nicholas Cage) is cheating, finds out her father who happens to be a pilot is flying to London so she looks for him at the airport. When she spots him he happens to be not alone but rather acting flirty with Hattie Durham (Nicky Whelan) a flight attendant who happens to be on the same overnight flight from New York to London.   A brief conversation between Chloe and her father and he is off to the friendly skies on PCA along with Buck who is a passenger on this flight, first class of course.

Chloe makes the drive home to see her mother and little brother Raymie (Major Dodson) and after a short visit drives to the mall with her brother. Dad is in the air with an array of characters including Shasta Carvell (Jordin Sparks), a sports player’s wife with a young daughter, Melvin Weir (Martin Klebba) tall on personality but short in life, Simon (Quinton Aaron) along with several others on a packed plane. Some time in after the story tries to develop the characters millions of people just disappear leaving behind nothing but clothes. Honestly this film could have disappeared and no one would notice! I guess according to the bible the good shall be taken to heaven and the rest left on earth to be persecuted. Planes fall from the sky, cars lose control, people go rampant and the question surfaces whether it is the end of the world or the beginning.

The director really has some awful camera angles that just look bad; the story is a bit all over the place with several holes big enough to fall into. Even the score is like something from the 1970’s and with the bad writing at times it never helps this mostly painful story take off. Truly it would have been best for television or straight to DVD. Religious films are big in the theaters right now but this one I don’t think can be saved. If not for some of the special effects which still are not worth the conversation and some of the acting then this film should disappear like the millions of people in the story line. It doesn’t even come close to some of the other Christian based films recently to grace the big screen.

As for the acting if not for Murray and Thomson this film would be a total wash and any rating I give this film is attributed mainly to them. Cage is just awkward in this film although Thompson was pretty good even though short lived. Whelan is good to look at but time to visit acting 101 again. Sparks has her moments but no thanks to her writers. Klebba gives the stereotypical cliché humor to the film which just seems lost and offensive. Overall a film that has its moments but far from enough to spend money on at the theater but surely might be worth a rental someday. Written and disappointed yet I give it 1 paw out of four for some decent moments especially involving Murray and Thomson yet I did like the fact they spotlighted a dog who lost its master. In the end, I cannot imagine anything but a quick death at the box office for this movie. Hopefully it will go to Heaven!

More in this category: « The Equilizer The Good Lie »
back to top