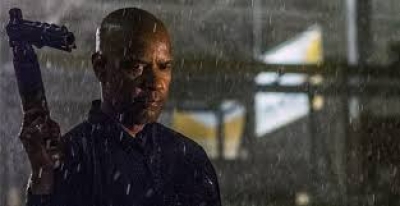 “The two most important days in your life are the day you were born and the day you find out why” a phenomenal quote by Mark Twain. As for Robert McCall ( Denzel Washington) he has put his past behind him to live a quiet life in a suburb of Boston. He wakes up in his small apartment, goes to work at Home Mart putting in forty hours a week where he has made several friends like Ralphie (Johnny Skourtis), an over-weight co-worker training to become a security guard with the help of Robert and Jenny (Anastasia Sanidopoulos Mousis) amongst a number of others. Robert is a loved man, always a smile on his face and a hand out to help friends. Every late evening he walks to the Bridge Diner on Chestnut Street for some food and to read his books, same table, different books, and the same books his deceased wife once read. He has befriended a young prostitute named Teri (Chloe Grace Moretz) real name Alina and after some heart to heart conversation informed her that only she can change her life.

It’s not until one night when he hears that Alina has been beaten almost to death by a man called Slavi (David Meunier) and lies in a local ICU unit in the hospital does Robert’s personality change. At first Robert tries to negotiate a deal with Slavi and his men but when reasoning has no home between them Robert takes matters in his own hands in twenty eight seconds. Not quite a record time but enough to take care of business and make a point. Soon thereafter a new guy shows up in town, Teddy (Marton Csokas) the right hand man to Vladimir Pushkin (Vladimir Kulich) a Russian Mafia leader. Teddy is there with the help of some crooked cops to get the job done and seek and kill the person or persons that killed Slavi and his men no matter at what life taken such as Alina’s friend Mandy (Haley Bennett). Mostly from this point on Robert has moved into what he tried to leave in the past, a fully trained killer and with some knowledge and permission from his friend s Brian Plummer (Bill Pullman) and his wife Susan (Melissa Leo) Robert will stop at nothing for justice. One can pray for rain but as always what comes with it is mud and in the case of Robert’s search for justice people are covered in mud from head to toe.

In the end, like something out of a horror film lives are lost in some extremely brutal manners from Boston to Moscow yet Robert seeks peace in his body, mind and spirit. Overall this invisible man, friend of Alina’s and just a super-hero type man out for justice has once again come to terms with his life and has headed back to work and the life he knows so well.

I loved the direction, writing and balance of this story. It never really has some major peaks and little valleys but it does have one superb straight line approach and flow that draws you in and keeps you intrigued from start to finish. Some scenes play out like something out of a Michael Meyers nightmare but albeit it is filled with enough action, thrills, drama and intensity to keep the audience glued to the screen the entire time. Not a lot of twists in this story but more so straight forward in your face out to kill action.

Washington is absolutely fantastic in this film. Even though like us all he is getting up in age he can obviously control a film and an audience to kick some ass in the end. Csokas is one creepy man and this aspect along with tattoos from hell only help to make him even more psychotic looking. Moretz doesn’t have a huge role but plays it well as the focus for Washington’s character to get back in the past. Also having a small role is Pullman and Leo but I must say once again like in her other films Leo has a sense of command when you see her on screen. Skourtis adds some needed levity and the likeability factor to his character and Meunier and Kulich some of the dark side but overall a great cast with an exceptional story and some brilliant direction accompanied by a perfect score make this movie worth seeing in the theater. Written with three paws out of four, I’m Jon Patch.

More in this category: « This Is Where I Leave You Left Behind »
back to top