This Is Where I Leave You Featured 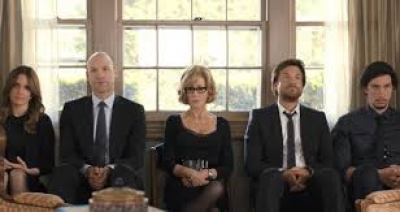 Judd Altman (Jason Bateman) is a producer for The Man Up Show hosted by his friend Wade Beaufort (Dax Shepard) but when Judd takes a birthday cake home to his wife Quinn (Abigail Spencer) she was already busy blowing out more than candles. Sometime later after Judd moves out he gets word of his father dying. A trip back to his hometown for the funeral without Quinn he soon discovers that life and happiness does not always go together. Or does it but just not in his family.

His sister Wendy (Tina Fey) has a family, child Cole (Wade Lappin) who is trying to potty train himself wherever possible and husband Barry (Aaron Lazar) who happens to be a bit unhappy himself. Yet back in the hometown, memories bring back a bit of emotions between Wendy and Horry (Timothy Olyphant) a once love that went away after a car accident when they were younger. Brother Paul (Corey Stoll) is looking to take over his father’s sporting goods store that is if he can convince his siblings to sell their shares. He and his wife Alice (Kathryn Hahn) are still trying to have a child but for some reasons their attempts are failing so she tries to take a poke on an old flame. As for Philip (Adam Driver) the youngest of the brothers, he is dating a much older woman Tracy Sullivan (Connie Britton). Tracy is a wealthy psychologist and Philip well he’s still on the verge of childhood and not growing up any time soon.

Dad’s final wishes were for the family to practice Shiva for seven days and as for mother Hilary (Jane Fonda), new boob job and all, author of “Cradle and All”, she thinks that the time will be good for the family to bond once again. Maybe not quite! Thankfully her good friend and neighbor Linda Callen (Debra Monk), Horry’s mother was a big help in times of need. As is Penny Moore (Rose Byrne) who steps up to the rink for Judd as he deals with no job and a pending divorce amongst other issues that pop up a bit later in the story.

There are many lessons to be learned by this Altman family and the many different yet entertaining family and friends that come together under their roof but through it all family is blood and no matter what it will always be thinker than water. In life we tend to hurt the ones we love yet be nice to the ones we cannot. Life is far from perfect and love is not always easy to find but in the end if you can find moments of happiness along the way then you’re one step ahead of many others. This is a family that comes together to try to find happy yet along the way they find more, they find each other.

I thought the film was going to be much funnier than it was although the dramatics in the story are very well done and very realistic to life and a large family. Nice directions and superb writing this film is worth seeing although like I said it has more serious moments than funny ones. It will leave you missing your family no matter how broken they are of which the writers do a nice job of developing each character along the story line. In the end this great cast of characters are all phenomenal with Bateman, Fonda and Driver taking the lead with Fey, Stoll and Shepard taking a close second. Yet overall the entire cast was excellent with no disappointments what so ever. Albeit the trailers lead you towards a comedy for this film I think you’ll agree it turns into more of a drama. Either way it’s worth seeing especially if you come from a large family like me. Written and enjoyed with two and a half paws out of four I’m Jon Patch.

More in this category: « The Maze Runner The Equilizer »
back to top

We have 429 guests and no members online