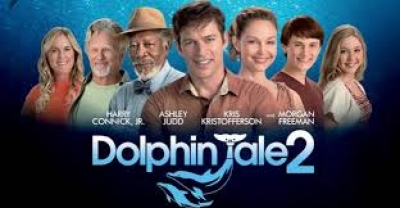 Inspired by true events the story of Winter the rescued dolphin without a tail continues years later at the Clearwater Florida Aquarium. Dr. Clay Haskett (Harry Connick Jr.) is still running the Clearwater Marine Aquarium, known as CMA, with his daughter Hazel (Cozi Zuehlsdorff), Sawyer Nelson (Nathan Gamble) and a large group of volunteers and staff.

They discovered that a dolphin has been beached with severe sunburn and medical conditions. At eight and half feet long and three hundred and fifty pounds the CMA staff rushed the dolphin now called Mandy to the Clearwater facility for constant medical and behavioral attention. When Panama the companion dolphin to Winter passed away from old age the staff thought maybe they could pair up Mandy with Winter. A task that of course could not be arranged since their motto is rescue, rehab, release and inspire. As long as a dolphin is able to return to the ocean it will be released once healthy enough to survive.

One problem since Mandy is being released back into the ocean and Panama has passed CMA must find a companion for Winter or else the USDA will move her to another facility. Meanwhile sometime later when Clay is informed of a juvenile dolphin, later known as Hope, found stranded the staff rush to accommodate her to a new life at the CMA. One problem, since Winter has been depressed and stressed out everyone is unsure if the two dolphins will bond especially since Winter is slightly handicapped.

When Dr. Aslan appears at the aquarium to offer Sawyer a twelve week voyage at sea to study ocean life and dolphins along with a full college scholarship Sawyer is now faced with making the decision to leave the CMA, his mother Lorraine (Ashley Judd), his friends and most important to him at this detrimental time, Winter. Dr. Cameron McCarthy (Morgan Freeman) specifies to Sawyer that there are too many opportunities out there to sit in a box no matter how nice the box is. For some people when one door closes another one opens making life full of opportunities and for Sawyer it could bring a whole new voyage.

I enjoyed the film, maybe not as much as the first one, but it still had a great family values message to it. Grant it there is one or two sad moments but in reality that is life yet I’m sure some kids will be asking mom and dad about them. The direction is well done and the writing is too but maybe if they shaved off ten to fifteen minutes from the story it would not have seemed to drag on a bit. The score and photography are breath-taking by far, both helping to make this film worth seeing with the family. For me personally it was pretty awesome to watch a film that was practically filmed in my backyard.

As for the cast, Gamble does a nice job in the lead along with Zuehlsdorff but it is truly Rufus the Pelican and some of the sea life that steal many of the scenes. Connick Jr. will not receive any acting awards for this role but he was a joy to watch and does a superb job. Judd is not a main focus here but she surely looks good as does Freeman. Kris Kristofferson has a minimal role as does Austin Stowell and Bethany Hamilton but in the end the story is well produced and truly worth taking the kids older than five since the younger ones will probably lose attention as did the ones at my screening. Overall a nice family film that delivers with some spectacular dolphin photography so if you’re looking for animal movie with a good message than this film is right for you by all means, as it was for me. Written with two and half paws out of four by Jon Patch. Remember to check out www.seewinter.com for more information on Winter and the CMA.

More in this category: « The Identical The Maze Runner »
back to top