sin City: A Dame to Kill For Featured 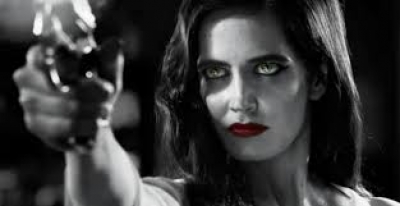 Basin City aka Sin City is filled with an array of characters one being Marv (Mickey Rourke) who keeps a close eye on Nancy (Jessica Alba) who dances as a stripper at his favorite bar. Nancy has her eyes on Senator Roark (Powers Boothe) but not for the reasons you may think. It’s more of a hated eye since Roark is the man that killed her love Hartigan (Bruce Willis) and Nancy is counting the days until she can take revenge on the Senator.

The Senator is a poker player and not exactly favored by many in Sin City but he does have a way of controlling the authorities in his favor. Johnny (Joseph Gordon-Levitt) a young and determined man has driven into town with one intention, to show up the Senator at poker by beating him in every hand. One problem it’s not the Senators hand that gets beaten in the end and as for Johnny he has more than one reason to visit the Senator. Blood is truly sometimes thicker than water but not this time it still flows downhill.

Dwight (Josh Brolin) is a photographer out to expose a client’s husband, Joey (Ray Liotta) for cheating on his wife but along the way he gets a little mixed up emotions when Ava (Eva Green) pops back into his life. She needs his help and protection from her rich husband or so it seems but this predator has a bit more of her dress and the audience gets to eventually see it all and her plan. Her private body guard Manute (Dennis Haysbert) is not to be reckoned with but when Dwight becomes defeated he pulls in the heavy 300 pound guns of Marv to help out. One problem, many things are not always as they appear and Dwight may have been born at night but not exactly last night. Although it seems the two cops that aid Ava, Mort (Christopher Meloni) and Bob (Jeremy Piven) may have been born recently especially since one of them is thinking with the wrong head.

In the end, it’s the women that become the manipulators but with a body like they have that weapon can do a lot of damage and it does, mentally but mainly physically. Yet some women in the old town come from a position of strength hence Gail (Rosario Dawson) who can kick butt as good as the rest of them, physically more than mentally. Overall when all is said and murdered all the characters come together bringing some type of peace to this wild and crazy game of life, love and murder in the Basin City.

I must admit I thought I would hate this film mainly because I figured it was going to be too much of a mixture of special effects, story line and odd cartoonish graphics but much to my surprise it is all that but it made sense and was actually very well written and directed. I truly enjoyed this film and especially because it all made sense and brought a large group of diverse well developed characters together completing the piece to this what could have been confusing but wasn’t puzzle of life in Sin City.

Rourke is awesome and Alba is perfection especially when she dances. Brolin is brilliant and shows off more than anticipated as does Green who not only acts well but looks phenomenal in and out of clothes. Gordon-Levitt is a joy to watch and Willis is a ghost but key to Alba’s character and her hatred for the character that Boothe takes on. Liotta, Meloni and Piven are short lived as are Christopher Lloyd and Lady Gaga but all add an important element to the story line which is star power and filler. Albeit the film is an artsy take on life, love and death in this make believe Sin City that in all truth could reflect any major metropolis in the Nation. Written and enjoyed with two and half paws out of four by Jon Patch.

More in this category: « If I Stay November Man »
back to top

We have 599 guests and no members online