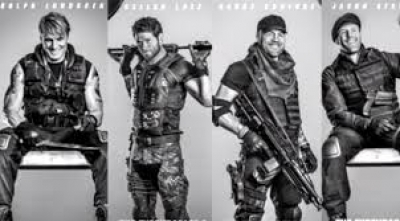 An armored transport by train is taking Doc Death (Wesley Snipes) a man known for killing more people than the plague to Denzali prison but after spending eight years in the hole his old team is about to break him out. Led by Barney Ross (Sylvester Stallone) he and his team, Lee Christmas (Jason Statham), Gunner (Dolph Lundgren) and Toll Road (Randy Couture) are flying in by helicopter to retrieve Doc no matter what the consequences. Once Doc is retrieved Barney and the team are off to Somalia on a mission with the hopes of taking down Conrad Stonebanks (Mel Gibson) for selling high volume possibly nuclear arms. Yet when matters go bad Caesar (Terry Crews) becomes the main reason for making a point, a point that Barney and Stonebanks are far from friends.

Soon thereafter Barney meets with Operations Officer Drummer (Harrison Ford) and is given an ultimatum to lose his current outdated team and hire a new one. With the help of Bonparte (Kelsey Grammer), Barney travels the country to assemble a younger team to capture Stonebanks alive, Galgo (Antonio Banderas) the talker that lied about his age,Thorn (Glen Powell) the climber, Mars (Victor Ortiz) the shooter, Luna (Ronda Rousey) the bouncer and Smilee (Kellan Lutz) the hard to please member of the team, out with old in with the new. But is this a good thing?

Barney and his new younger team set off to find Stonebanks in Bucharest, after a battle scene and fight to the finish the younger team are taken hostage and later used as pawns in this chess game controlled by Stonebanks. When the chips are down old friends once again step up to the plate to help their old friend Barney, even Trench (Arnold Schwarznegger) and Yin Yang (Jet Li) along with an unexpected welcome by Drummer, all to save a group of young fighters with a bit of an attitude towards their elders. What the team thought would be an easy in and out fight turned out to be a ride to the end with with one proud demented father taking a look at his life. Hail Caesar!

The story is a bit weak especially the lack of back story on the characters. Nicely directed with a great score, plenty of action and lots to admire from an old group of Hollywood actors this film is worthy to watch on the big screen. It was nice to see the old battle with the new outlining the big names of yesterday to the up-and-comers but I think the film did not need the younger group unless they’re thinking of some type of spin-off.

All of the actors are nicely cast yet the standouts to me are Stallone who at his age can still hang with the best. Snipes from jail to this film checked out with a perfect attitude, keeping the audience intrigued with his progress. Gibson is truly spot on here as the villain and Banderas adds some much needed hysterics to the story. As for the rest of the actors both young and old they are all spot on with their roles and acting abilities. If you’re looking for a film high on action yet lower on a good storyline than this blast from the past is truly a nice ride. With two and half paws out of four this review is written by Jon Patch.

More in this category: « The Giver If I Stay »
back to top

We have 231 guests and no members online