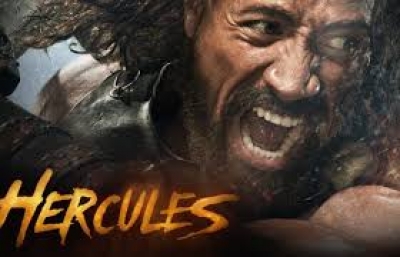 Northern Greece 358 BC, Hercules (Dwayne Johnson) the son of Zeus walks the lands in distress over the loss of his family three years earlier. Since then he has walked the earth as a mercenary working for gold and has taken up with the companionship of five others Amphiaraus (Ian McShane) the voice of his own doom, Autolycus (Rufus Sewell) the voice of wisdom, Tydeus (Aksel Hennie) more animal than human struggles every day with his personal horror, Atalanta (Ingrid Bolso Berdal) the excellent archer and Iolaus (Reece Ritchie) Hercules nephew.

Ergenia (Rebecca Ferguson) the princess from Thrace as searched for Hercules and has asked that he help her King Lord Cotys (John Hurt) save their kingdom against the ruthless Rhesus (Tobias Santelmann) and his army. In return their kingdom will reward Hercules for twice his weight in gold. Upon entering Thrace and their kingdom Hercules befriends Ergenia’s son Arius (Isaac Andrews) who is one day destined to be king. Secrets are kept from Hercules and not all appears to be as it may seem in the land of Thrace yet Hercules who suffers from nightmares of the three headed wolf continues his agreement to protect Lord Cotys and his kingdom. Hercules and his five friends train the Lords army to fight like soldiers and when they fight in a three to one battle with Rhesus and his army they plan to win.

It’s not until the battle ends that Hercules begins to realize that all is not right with Lord Cotys. When King Eurystheus (Joseph Fiennes) the king of Hercules homeland appears the truth is told and Hercules soon proves why he is known as a son of the Gods. Kingdoms are born from armies but empires are born from alliances and forgiveness is given if only deserved. In the end the world needs a hero to believe in and so it shall.

I was uncertain if I was going to really enjoy this film since I was a little uncertain of Johnson cast as Hercules but I must admit he is more than capable of pulling off comedy and action as we all know and in this film he does not disappoint. Nice direction and a superb script along with some great cinematography and score and this film moves swift with action and adventure.

A great cast as I said Johnson does a superb job as Hercules even though he is looking a bit older yet still in phenomenal physical shape. His five followers Sewell, Hennie, Berdal, Ritchie and McShane are a wonderful mix of characters that keep the action, humor and drama moving at all times. Ferguson and Andrews are nicely cast as is Hurt although I found Fiennes to be a slight off course either way this film is truly worth seeing for its 3D battle scenes along with its cast, direction and writing. Written and obviously enjoyed with three paws out of four by Jon Patch.

More in this category: « Lucy Guardians of the Galaxy »
back to top

We have 323 guests and no members online