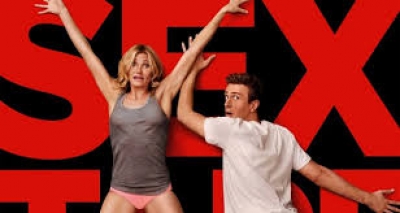 Do you remember the first time you saw your spouse/partner naked? What about the second time? Then you said “I love you” and more sex ensued! As for the guy in the relationship every time you had a thought of your partner you got an erection! Next thing you know you’re asking your partner to marry you. Then you start to have fear of the future together wondering what months or years down the road together will bring your way. Good or bad will your sex life suffer? As for Annie (Cameron Diaz) and Jay (Jason Segel) they followed the typical path of relationships, both asking each other about the future and what it will mean for them in the long run. Two kids later, Clive (Sebastian Hedges Thomas) and Nell (Giselle Eisenberg) the parent’s sex life seemed to come to a stop, never finding time for each other let alone sex.

Annie is being pursued by the Piper Brothers Corporation run by Hank ( Rob Lowe) for her writing expertise about motherhood and Jay works at a radio station using a multiple of IPads for his daily work. When a new IPad comes out Jay always gives the old ones away to friends and family. One night when Annie asks her mother Linda (Nancy Lenehan) to watch the kids she has every intention to welcome Jay home to a night of wild sex performed everywhere in the house. Well when things don’t quite go as planned as when they were younger Annie suggests making a home video about the joys of sex. Many ass shots later and many different positions the sex on tape is ready to go. Sometime after the video is made thanks to Franken sync all the IPads that Jay gave away to friends and family came equip with their sex tape and now Annie and Jay have no choice but to get back their IPads to clear the video from them.

First stop Robby (Rob Corddry) and his wife Tess (Ellie Kemper) Annie suspects they have already watched it since Jay has been receiving anonymous text messages about the video. Well it’s not them but they do help Annie and Jay try to get the IPad from Hank, Annie’s potential new boss by visiting his home late in the evening. Sometimes the most docile of a person at the work place is not the same in the home and Hank proves this to be true. As for Jay let’s just say he has a much different evening at Hank’s house thanks to Ariel. A German Shepherd with one goal which is to take down Jay for snooping around the house. As for Annie, let’s just say it’s snowing from her nose.

I enjoyed the film for its writing an the direction is almost as good but overall even though I laughed several times during the story I found myself in the end feeling a bit underwhelmed. The story moves quickly and thankfully its only 90 minutes long but truthfully it has some pretty funny moments that reflect the typical life amongst parents. A good score and some eye catching glimpses of a naked Diaz and maybe not as much pleasurable Segel and this film is somewhat worth the effort albeit just a bit over-developed with the plot. Although I must say that the character development was quite sufficient.

As for Diaz, she not only looks great but is perfect in the comedy genre more so than drama. Segel plays well with her and her character giving them a sense of honestly and sexual compatibility on the screen. Corddry and Kemper are the perfect friends and Lowe is brilliant even for having a small role. Thomas and his on screen sister Eisenberg are both fantastic but I found my eye and ears tuned into the little sister much more so than her older brother. Overall I enjoyed this film, found myself laughing and relating to the story at times and honor it with two and a half paws out of four. I’m Jon Patch.

More in this category: « The Purge: Anarchy And So It Goes »
back to top

We have 786 guests and no members online