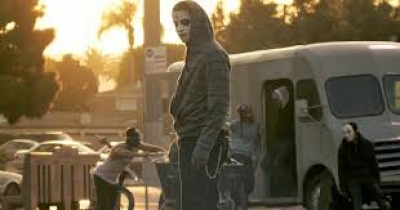 Wow what a difference a year makes. This second installment of “The Purge” is a hundred times better than the first. Its America the year 2023, unemployment is at an all-time low under 5% and the poverty level is unheard of thanks to the new founding fathers. It’s March 21, approximately 4:34 PM and in a little over two hours the purge is about to begin. Eva Sanchez (Carmen Ejogo) is a local waitress in need of a raise in order to maintain a life for her daughter Cali (Zoe Soul) and her father Papa Rico (John Beasley) and staying late to talk to her boss is worrisome since the purge is about to begin soon.

Shane (Zach Gilford) and his wife Liz (Kiele Sanchez) are driving home when they encounter a group of bikers with painted faces and masks. It’s not until their car breaks down on the outskirts of downtown with the purge to begin in thirty minutes does their lives take a turn for the worst. Basically from that moment on they are running for their lives with death surrounding their every move.

Eva and Cali thought they were safe at home with Papa but things never seem to happen as one would hope and when the women are dragged into the streets by men in uniforms life for these two is about to end. That is until Sergeant (Frank Grillo) stumbles upon the mother and daughter deciding to help them. Yet from this moment on several lives crash when Sergeant, Eva, Cali, Shane and Liz all come together trying to survive. If the low lives don’t kill them then the wealthy will auction them off to be hunted in a controlled environment either way their chances of living are slim by far.

There is some hope from a group of NFFA members who follow a man named Carmelo (Michael K. Williams) he is opposed to the purge knowing the full meaning behind this government run killing holiday and fights against the people who partake in the yearly event. On the downtown streets, in the financial district, in the subways or city buildings, apparently no place is safe during “The Purge”. As for Sergeant what turned out to be a night meant for revenge turned out to be a night of enlightenment. Now there are 364 days left until the next purge.

I have to say that this movie is actually quite good and a whole lot better than the first. The director who happens to also be the writer takes us out of the home and into the streets opening up the possibilities for anything to happen. We see murders everywhere but he focuses on five main characters during this blood bath of an evening which happens to be a holiday approved yearly event by government officials around the country. A great yet chilling score with some superb special effects this film really makes you jump from your seats a few times as the director makes the unexpected happen. Overall a well done film that is sure to see another installment next year since I believe it will do well with word of mouth.

Grillo was superb playing the rough guy out with a mission but due to his soft heart finds himself being a savior rather than a killer. Ejogo was spot on and although at times I thought Soul was slightly obnoxious I really enjoyed her character. Sanchez and Gilford round off the main five and both play well together right down to their gun wielding shootout in the subway. Along with a nice supporting cast this film is well worth seeing and if you did not like the first one, I was not all impressed either; you will like this one since it really is extremely better than the first. Written and thoroughly enjoyed with three paws out of four by Jon Patch.

More in this category: « Planes: Fire & Rescue Sex Tape »
back to top

We have 489 guests and no members online