Dawn of the Planet of the Apes Featured 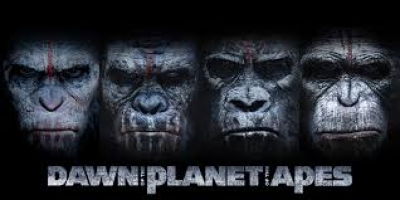 A Simian virus has killed most of the human population and for what remains of the human species many more have died due to fighting amongst themselves. Caesar (Andy Serkis) has built a colony of apes in the forests of San Francisco, California where he lives with his mate and their grown son, Blue Eyes (Nick Thurston). Caesar’s mate is giving birth to a new son, a brother for Blue Eyes. Caesar is a smart ape hence the reason why he is the leader and well versed of course in both sign language and verbal words as he communicates with his fellow apes. He is trying to teach his eldest son the value of trust as well as hunting and courage to make the right decisions while reminding him that he must always think before he acts. So as to maybe avoid what will remain as a lifelong scar due to an encounter with a bear.

It is known to the apes that humans destroy humans but it is spoken truth amongst the apes that ape will not kill ape. Suddenly a gunshot is heard of a distance in the forest and Ash (Larramie Doc Shaw) is lying on the ground as Rocket (Terry Notary) his father looks over him. A human named Carver (Kirk Acevedo) out of fear has shot him and the other apes have come to his rescue. Moments later Caesar tells Malcolm (Jason Clarke), the peace maker, his son Alexander (Kodi Smit-Mcphee), Ellie (Keri Russell) and a few other humans to leave and not to come back. Skeptical about the humans Caesar has them followed by his right hand ape Koba (Toby Kebbell), an ape that Caesar rescued from a research lab some time back. The reason for Koba’s dislike for humans of course is because of the way they treated him in captivity and this anger leads Koba to eventually start a war. A war Caesar had no intention of creating against the humans.

There was a reason why Malcom and his people where on the mountain, they needed to reach the dam in order to utilize it for power to light their city, led by Dreyfus (Gary Oldman) and communicate with the outside world. When Caesar cast them from the forest the humans prospects of gaining hydro-power from the dam are close to impossible yet with only two to three weeks left of the power supply they have in the city the humans have no choice but to return and ask Caesar for his help. Help is granted to the humans but as for Koba he is not happy so when he creates a reason for a war, a war has broken out and many apes as well as humans have perished. Left for dead but still breathing Caesar is found by Ellie, Malcolm and Alexander but what they thought the reason was for why the war began it turns out it was far from the truth. As Koba rages on against the humans the apes follow him out of fear yet Caesar once again emerges from the ashes to reclaim his leadership and try to restore peace amongst man and ape no matter what it takes. In a bloody battle, Malcolm thought they stood a chance for peace as did Caesar but what they got in the end will only be revealed in time.

I went in with medium expectations yet got well above my satisfaction level. Reeves does a phenomenal job of making this film look real, authentic and modern. Yet it is the writers that really make this story come to life. Even though the beginning of the film uses more bodily movement and action than language the story is beautifully and morally told which should cause the word of mouth to chatter a positive tune at the box office. A terrific score mixed in with some superb special effects and this film is as good if not better than the first one.

Serkis is exceptional and once again does justice to the role. Clarke gives authority to his character yet adds a nice touch of emotional feelings to his actions. I love Russell and once again she does not disappoint but rather does a real nice job of helping to carry this sequel to a box office victory. Oldman is perfection; Kebbell is brilliant along with Karin Konoval who plays an ape named Maurice. Smit-McPhee is a nice touch to round off the family appeal while giving him a sense of maturity to his role. Overall a well-produced, acted and written story that is sure to appeal to all ages of the female and male movie-goers. Written with three and a half paws out of four by Jon Patch.

More in this category: « Tammy Planes: Fire & Rescue »
back to top

We have 175 guests and no members online