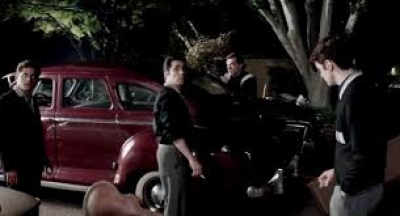 Belleville, New Jersey, 1951, a trio of young men take the stage at the Strand Club, Tommy Devito (Vincent Piazza), Nick DeVito (Johnny Cannizzarro) and Nick Massi (Michael Lomenda). Tommy has been in trouble with the law and once again ends up in jail after an incident involving a car, a safe and a store window, not to forget a minor named Frankie Valli (John Lloyd Young). Soon thereafter Frankie joins the group as their lead singer, eventually marries Mary (Renee Marino) and begins to start a family while juggling his singing career as well.

His number one admirer and fan of their song, “My Mother’s Eyes”, Gyp DeCarlo (Christopher Walken) cries whenever Frankie sings that song and promises to always take care of Frankie. DeCarlo is very well connected in the community, if you know what I mean. The guy’s friend Joey (Joseph Russo) happens to discover a writer and performer that he thinks would be perfect for Frankie’s voice and after a bit of a control issue from Tommy, Bob Gaudio (Erich Bergen) joins “The Four Lovers”, yes not a great name for the group. Yet soon they meet up with Bob Crewe (Mike Doyle) at the recording studios and he promises them a contract. Well read the fine print at all times since their deal was not exactly what they envisioned and in order to record their own music they needed cash they do not have on hand. Where there’s a will there’s a way, at least for Tommy who takes up business with a local shark, Norm Waxman (Donnie Kehr).

The record gets done, the careers take off, they change their name to “The Four Seasons” and soon they are on American Bandstand singing “Big Girls Don’t Cry” launched as a hit with “Walk like a Man” not far behind. The writing from Bob is producing hits and rightfully so thanks to Frankie who has a voice like no other in the music industry. Three number one’s in a row yet for Frankie home life is not going so well. It’s not until their appearance on Ed Sullivan does the group find out from Norm that Tommy is in debt for six figures to a shark.

Frankie is an honorable man; he decides to stick by Tommy and help pay the debt with some advice from his friend DeCarlo. Frankie also tries to become the father he wasn’t to his family especially Francine (Freya Tingley) but discovers that sometimes if you wait too long it can get too late. All this leading up to another hit “You’re Just Too Good to be True” and Frankie’s ultimate dream of the big band. Years later even though the group separated they once again reunite in 1990 at the Rock and Roll Hall of Fame. Stay for the credits since I thought this moment was one of the best during this half hour to long film version of the play.

I was privileged to see Jersey Boys on stage in New York City and must say I enjoyed the play much more than the film. I think Eastwood did a nice job directing but not quite as well as some of his other films. The movie plays out quite a bit like the play which in my opinion caused it to seem a bit awkward during scene changes. It was thirty minutes too long and I thought that some of the camera angles and scenes were a bit strange and awkward. The writing is spot on to the play and fits in well with most of the story. Of course the music is phenomenal although minimal yet the lip synching to me seemed a bit off let alone some of the make-up and hair styles. Yet overall I did enjoy this film it could have been better.

John Lloyd Young is exceptional and as the lead character deserves the applause I’m sure he is receiving. Piazza is a good casting choice and does a nice job as does Walken and Massi. Bergen was a breath of fresh air though and probably second to Young when it comes to the performances in the story. Even though there is good character development surrounding the male actors the film seems to lose the background of the female characters leaving us not as invested in their characters as much as that of “The Four Seasons”. Oh how this music brought back memories to me listening to all my 45 records as a child. Strange as it may seem after the screening my friend and I went to IHop for food and playing in the restaurant was the music of “The Four Seasons”, ironic or a sign? Either way I’m still a fan! Written and enjoyed with two paws out of four, I’m Jon Patch.

More in this category: « Obvious Child Think Like a Man Too »
back to top

We have 463 guests and no members online