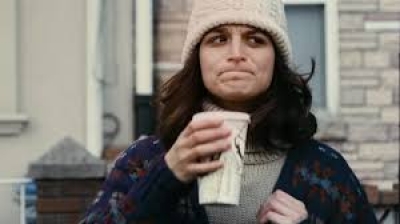 Donna Stern (Jenny Slate) is a stand-up comedienne in Brooklyn, New York and she has a habit of discussing her private life with her audience. Her boyfriend Ryan (Paul Briganti) is not a fan of being the brunt of her jokes especially when it comes to their sex life so he decides to cheat on Donna with her best friend Kate.

Some people say change is good! I ask though is it really? I guess it depends on for whom! Donna's job at the bookstore is ending in six weeks, her boyfriend left her so she goes on a drinking binge while leaving multiple messages, some good some bad, for Ryan and Kate. It's not until a new guy Max (Jake Lacy) comes into Donna's life that her direction moving forward takes a turn for better or worse. After one wild night of drinking and sex, a few weeks later Donna ends up pregnant and she is left with the decision on whether to tell Max, her father (Richard Kind) and her mother (Polly Draper). Thankfully her good friends Nellie (Gaby Hoffman) and Joey (Gabe Liedman) have stood by her and her possible decision to have an abortion.

Pee fart Max, you'll get that reference after seeing the film, doesn't seem to disappear but tends to always show up in the oddest places at the oddest times but overall for Donna and her choices it ends up being a good thing after all. In life change is evident and for some relationships some come along and some are gone with the wind.

This small budget film was well worth seeing. I first thought it was going to be horrible but quite honestly it was one of the most honest romance/relationship stories that deal with some very touchy subjects that I've seen in quite some time and to top it off it's very funny without being over-offensive. Although to some I am sure they will still be offended! Nice direction, great writing, and a likeable cast even though mostly unknown helps this film shine as a small fish in a big pond.

Slate is sensational as she tackles some very controversial subjects and Lacy is a nice fit to her character. Overall a perfect supporting cast helps launch this film as a film well deserving to open on a big screen near you. Written and enjoyed with some advice to be taken about break-ups for myself with two paws out of four, I'm Jon Patch.

More in this category: « 22 Jump Street Jersey Boys »
back to top