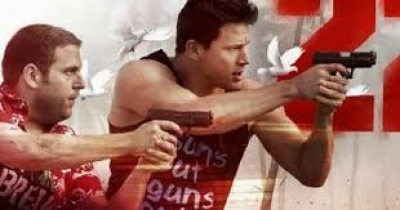 In the beginning of the film the audience is given a brief synopsis of what happened previously on “21 Jump Street” so in case you forgot you do get a refresher course. Still cops and now on an undercover drug operation Schmidt (Jonah Hill) and Jenko (Channing Tatum) come face to face with The Ghost (Peter Stormare) along with an octopus, parrots, iguana and a number of other obstacles along the way in an attempt to bring in this well known drug lord.

Back at the Vietnamese church, no longer the Korean church, that one is smaller and across the street, next to 23 Jump Street, Schmidt and Jenko meet up with the boss Captain Dickson (Ice Cube) and are told they need to go undercover again but this time as college dudes. Ok 30 year olds may have a hard time passing as recent high school grads but Schmidt now known solely as Doug and his so called brother Jenko aka Brad do their best to fit in. Grant it Brad fits in well with the frat group, football team and just about everyone whereas Doug has his issues and ends up in the art group. One good thing though he meets a hot girl named Maya (Amber Stevens) and they instantly get connected, if you know what I mean! One major issue life is truly a small world after all! I will leave it at that!

Work hard, yes, play hard, yes, the motto at school and the path they follow in order to find the dealer to lead them to the supplier of a drug known as WhyPhy (pronounced Wi Fi). They have some clues and some leads along with some connections involving the death of Cynthia Watson that they hope will lead them the answers to find where the drugs are coming from within the school boundaries. They reach out to Mr. Walters (Rob Riggle) and Eric (Dave Franco) who they locked up in jail together in the previous story for advice but what they find out may be more than they bargained for. Not that there’s anything wrong with that!

The guys experience dorm life on the campus of MC State, open mic night, classes, clicks, girls and much more while all along trying to stay focused on their task. Jenko aka Brad is having issues questioning if he wants to remain with Schmidt as a partner or go off and sow his oats. So tension begins to develop which only gets worse as time presses on for Doug and Brad at school. Brad becomes closer to Zook (Wyatt Russell) and his frat boy Rooster (Jimmy Tatro) who happens to also be possible criminals in the case. Doug becomes closer with Maya and might even be more so if it weren’t for her creepy roommate Mercedes (Jillian Bell) who just so happens to pop up all too often. It’s not until Parents Day at school that the truth comes out leaving one very shocking revelation and a real blow to all parties involved.

Well Schmidt and Jenko decide to separate all along missing each other since they’ve been gone. Question is will Schmidt continue to drag Jenko down or lift him up? In the end when one decides to cover the other they both realize what is best for their relationship and life ahead which could develop the possibilities of many more Jump Streets in the future.

The film is absolutely hysterical and some of the lines are brilliant. I thought it loses its way slightly towards the end but overall with a few blunders this story is written by some very funny people who end up reflecting their talents on screen. There are a few hiccups along the way with the layout of the story but not enough to damage any thoughts of seeing this well directed comedy. A great soundtrack and some stunts, car chases, explosions and bromance, this film is truly worth seeing in a theater near you.

Tatum does a nice job as always and is truly finding himself able to cover any genre in Hollywood. If not saving the White House, he’s getting naked in front of millions either way he is truly able to conquer action, drama, romance and comedy making him a man in demand. As for Hill he is phenomenal and should truly be considered during awards. Yes it is a comedy and they don’t seem to rank as high as does dramas or even musicals but this actor is truly spot on and perfect from start to finish. Ice Cube is a bit over the top at moments but it is the way he was written so I can’t complain. Nor can I on any of the other supporting actors in this very funny movie. Stormare, Russell, Stevens, Bell, Tatro amongst others all bring their A game and do it well leaving the audience no choice than to laugh in hysterics. Even though the film has a few holes along the way it is absolutely worth the box office ticket to see it with friends on opening weekend. Written and thoroughly enjoyed along with relatable to my current struggles, with three paws out of four, mainly for the great relationship between Hill and Tatum, I’m Jon Patch.

More in this category: « The Fault in Our Stars Obvious Child »
back to top

We have 403 guests and no members online